Remember back just a decade ago when job creation in Wisconsin was the central issue that could win or lose elections. Scott Walker’s central theme when he won the governorship in 2010 was his promise to create 250,000 jobs in his first four-year term.
Caught flat-footed by Walker’s jobs promise at a time when the state’s economic growth was stagnant, his opponent, Tom Barrett upped the ante to 300,000. But Walker had stolen the march with his business friendly campaign. 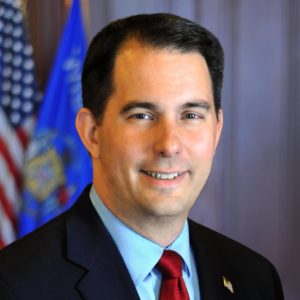 Once elected, Gov. Walker shifted strategic gears to push Act 10, which vitiated the power of public employee unions and caused one of the biggest political uproars in the history of state. Job creation was consigned to the rumble seat.

It took well into his second term to reach the original goal of 250,000.

I recall that chapter in our history to put into perspective the filing in the last four weeks of more than 350,000 Wisconsin workers for unemployment compensation.

That pushes the projected jobless total in the state to more than 800,000 workers. It’s an almost incomprehensible total.

Our leaders and pundits have run out of hyperbolic language to describe the damage to the economy. They use words like nightmare, shit show, apocalypse, hideous, horrible. The most common refrain has been “unprecedented in our life times.”

Beyond language, the government dole for out-of-work individuals will be itself be a tidal wave that could sink the federal and state ships if the feds couldn’t crank up the presses to create money out of ink, paper and thin air.

The unemployment compensation for 16 million Americans out of work at an average $850 per week comes to about $700 billion per year, about one-third of Congress’s billion one-time bailout money of $2.2 billion.

Plain dead obvious is that we have to get the economy rolling again, but in a manner that doesn’t bring another wave of coronavirus infections and deaths. Short of a new vaccine, for which maximum dollars must be spent, the best thinking of health care experts follows two lines on re-opening:

• Adopt massive testing, tracing and subsequent isolation of infected and exposed people. All three of these under-funded initiatives cannot be over-funded. Open up the treasury. Tap unused public health dollars, like the $800 million in Blue Cross endowments at our state’s two medical colleges.

• Start with openings in the parts of the country and state with the lowest incidence of the virus and then roll it out as the disease numbers decline.

In northern Wisconsin, for example, the damage to the economy and working families out-weighs the relatively low risk from the disease. Open up here first and then roll the openings to other lower risk sections of the state. Use the north as a pilot on re-opening.

A general clamp-down is a blunt instrument that defies common sense.

As another step in re-opening, reverse immediately over-reactions like the closures of places like golf courses and state trail systems. But keep the rules about social distancing.
We have to trust the big majority of citizens to do the right thing. No one wants to contract that killer virus.

And trust the private sector to step up on protective equipment where the public sector failed to build adequate reserves and fast responding supply line capacity. The factories are ramping up quickly.

In short, get more aggressive on identifying and quarantining the unfortunate people who have been exposed, but be very pragmatic about getting the economy back action.
Gov. Evers needs to evaluate the tradeoffs. People can die of despair if they are totally broke, too.