Since when did sports reporters and columnists become business consultants? They have been writing like the latter as they cover the reorganization of the Green Bay Packers.

Back in my day as a newsman, reporters reported and columnists did some analysis of the news. But they didn’t put themselves on the mountaintop with proscriptions on how a team should be run or how the organization should be organized.

That level of arrogance is how the Gannett writers come off in today’s skinny newspapers. It’s a new thing that the writers see themselves as smarter than the football professionals in charge. Their harping about the team’s recent performance on the field in the 7-9 Rogers-light year must have had something to do with the house cleaning of coaches in Green Bay. That on-the-field commentary is in within bounds.

But they are over their heads when taking issue with Packers’ president Mark Murphy decision to change the organizational structure so that three executives report to him versus one, the general manager.

There are a couple of generally accepted practices in management of an organization where the sports pundits are not up to speed. The first rule is to get the right people on the bus. The right talent is more important than the structure. Indeed, the structure is often designed to fit the talent, not the other way around.

In any case, the people on the bus have to be formed into a coherent, cohesive management team. That is harder to do when there is only one person in charge at the second level of management, i.e. Ted Thompson under Murphy.

Most presidents or CEOs (Murphy in this case) have a number of reports, often three to seven. More reports than that in the president’s span of control leads to communication issues. But filtering all communication to the president through one person, especially a close-mouthed person like Thompson, carries the liklihood of cutting off healthy dialogue. 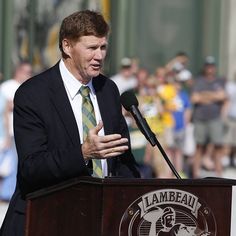 None of us, including the writers, knows what goes on in terms of teamwork and dialogue inside the Packers’ headquarters. To suggest organizational changes without that knowledge is just sports page blather.

Further, organizational design always has to be a function of the mission of the organization (win Super Bowls) and the challenges of a changing marketplace. The argument can be made that a one-man show in terms of football operations is too much for any one person in today’s complex NFL.

Obviously, it is Murphy’s call as to how he wants his executive ranks organized. He surely ran his new organization chart by the executive committee of the board of directors and got its blessing.

Nonetheless, one writer closed his column this week by opining that he thought Murphy had not made the right structural move.

I used to sit next to the sports writers at the old Milwaukee Sentinel. They were lovely, fun guys. Today’s writers dig deeper than ever before, including lots of statistical analysis. (The Packers get more coverage than state and local government.) That gives some standing to speak their onions about what happens on the field. It’s part of the banter in the sports world.

But, like all critics, they are still in the cheap seats with Bob Uecker, especially on management structures.

I wouldn’t have hired any of them to run lemonade stand.