Long-shot Foxconn deal has to pay off

In the competition for a big Foxconn plant with an alleged 10,000 workers, bear in mind that Wisconsin has generally been a loser in sweepstakes those big deals. 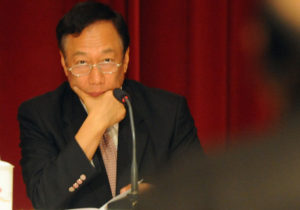 Name one of any size where we got the blue ribbon.

There are a couple that come to mind. One was the win in 2009 when Mercury Maine closed its Oklahoma operations and consolidated in Fond du Lac, its home base. State and local subsidies totaled some $123 million. More than 1700 jobs have been created in the state since then. The red-carpet campaign that cost $72,000 per job paid off.
A second win came when Uline moved from Illinois to Kenosha in 2010. No subsidies were involved. Uline now employs 5000.

Did I miss any other large ones? There have been some mid-size wins, like the recent decision by HARIBO to set up a candy-making plant with 475 jobs in Kenosha County.

But the plain truth is that almost all the major employers in Wisconsin started here. Epic in Verona is the latest case study of a homegrown business that has grown to major proportions.

That said, if I am Terry Gou, founder and chairman of Foxconn, the gargantuan contract manufacturer that reportedly employs a million Chinese workers, I have to like what I see in Wisconsin as a choice for a multi-million dollar U.S. plant to make display panels. Here are some of major pluses:

• Thee has long been a bipartisan consensus that manufacturing should remain a pillar of the Wisconsin economy. In the 1970s, back when there were pro-growth Democrats, they led the way on exempting manufacturing plants and equipment from the property tax rolls. Republicans then led the way in 2013 to phase out the corporate income tax on manufacturers and agri-business. We all know that manufacturers are becoming highly efficient, so job growth won’t be there in that sector. But such policies have kept Wisconsin as a leading state for advanced manufacturing.

• Wisconsin has always invested heavily in education. Our schools and colleges have generally has provided enough skilled, trainable people for the factories of today, where the new economy has met the old economy. Our plant managers have learned to compete on a global basis through automation and lean disciplines. Those who opine otherwise have not been in a Wisconsin factory lately. (That is an open invitation to the guys in the cheap seats to come and check us out.) Despite recent cuts, Wisconsin ranks 12th in the nation in per capita investment in education.

• Labor markets are tight now, but the state loses 10,000 college graduates per year to out-migration. Mr. Gou could convince those skilled people to stay.

• Though half the states now have right-to-work laws, that is not an issue here with the recent passage of a law to join those ranks. Foxconn is not a fan of unions.

• The vaunted Wisconsin work ethic is alive and well.

• The state is ever more business friendly. That shows in common sense business regulation. Gov. Scott Walker is a cheerleader for economic development. He entertained Foxconn executives at the governor’s mansion. Pro-business Republicans look to keep control of the legislature for some time to come.

• While our personal taxes are on the high side, we are no longer in the top ten states. Our health costs are high, but the state has many innovators who are leading the way to a business model that works to deliver lower costs and better quality. We had a low uninsured rate before Obamacare and still do.

• We have powerful R&D centers at UW – Madison and UW – Milwaukee, which Foxconn could tap for product and process advancement. We make sophisticated stuff here, like imaging equipment.

• Milwaukee has a supplier network second to none in manufacturing, including law firms that understand the sector, ditto for accountants, process consultants, quality experts, automation and controls pioneers and supply chain gurus

Add it all up, and Foxconn would do well here.

That said, we have to look at the cost/benefit ratio. How many jobs are we talking about and what are the pay levels? What subsidies will be paid out? What kind of ROT will there be – return of taxes to offset the subsidies.

The Mercury subsidies have worked out to about $72,000 per job. If the average job pays $50,000 per year, and the state takes in about 10% in payroll and sales taxes, or $5000, then, in a dozen years, Wisconsin will have earned back the taxes invested in the deal in 14 years. That doesn’t factor in the indirect jobs down the supply chain.

No one really did that kind of analysis on the $250 million in taxpayer subsidies for the new Milwaukee Bucks arena. It was more a matter of civic pride.

But the competition among states for the Foxconn factory is purely a commercial deal. It has to pay off.

Bearing in mind that all our great employers started here, if we don’t get the Foxconn deal, the unspent subsidy dollars could instead be directed to the state’s rapidly improved startup economy. It’s a better bet.