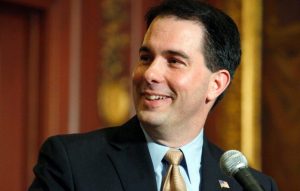 Wisconsin will hit Gov. Walker’s first term target of 250,000 added jobs, but it will take two terms to do it.

The goal required 62,500 jobs per year, but the state has been growing at roughly 1% or 30,000 jobs per year. That compares to average growth of about double that across the country.

So the state is lagging, and it is lagging because its two major metro areas are lagging. Over the last 12 months, the four-county Milwaukee metro area actually lost about 1000 jobs, ranking at the bottom for 50 metro areas. And, the metro Madison area only grew by .7%, or 3000 new jobs, despite the presence of a flagship university campus and the home of state government.

The rest of the state is generally doing better.

The slow job growth means that even though the Wisconsin unemployment rate has dipped to 4%, state leaders have more work to do on job creation. They can’t declare victory.

Gov. Walker and his GOP allies have taken big steps to improve the business climate, including a big tax break for the legacy economic bases of manufacturing and agri-business, a right-to-work law and major deregulation. That and the resurgence of the national economy have helped Wisconsin to regain moderate growth.

But what to do next? The best bet might be to bet on the economic regions of the state. They are closer to the action than the experts in the capitol. The last two governors have run tight ships, with most of the shots being called by a tight circle of staffers. Cabinets and top legislative leaders have been supportive. But, with the exception of right-to-work, the major parts of the political agenda have come out the governors’ offices, sometimes as a surprise like Act 10.

In contrast, the eighteen counties in northeastern Wisconsin have organized themselves in NEW North to get all their educational institutions into alignment on workforce training needs. Led by UW – Oshkosh and UW – Green Bay, they have pulled the technical colleges and K-12 districts into a K-20 compact to cooperate with industries to make sure their training is just where the open jobs are.

Reorganizing the University of Wisconsin System, along regional lines would accelerate that positive approach. There is great support on both sides of the aisle to put more resources into training, a rare of bipartisanship, but a Madison-centric system is not the way to go.

There is a head of steam from Speaker Robin Vos and President-elect Donald Trump to increase investments in road upgrading. That could be a stimulus in the short and long term, if their programs don’t escalate government debt at both levels.

A no-brainer for revving up the economy is to get even more serious about high-growth startups. Entrepreneurs generate most net new jobs. Almost all our great employers started in the state. Conclusion: we need more startups.

Thanks in part to a 25% tax credit for investing in high growth ventures, and to a more robust support ecosystem to encourage entrepreneurs, early stage funding has doubled in recent years. Nonetheless, there is still a dearth of capital for launching and expanding startup companies. The foundations in the state could play a much larger role in this space. So could angel investors, though they are already stepping up in greater numbers.

Fixing health care costs could put several thousand dollars in every home in Wisconsin. Private payers are already driving down bloated health care costs. The state could lead the way by doing the same with its 65,000 employees.

This is a partial list of ways to stimulate job creation and increase the state’s prosperity. Our leaders need to look at good-paying jobs as “a public good,” as one former Wisconsin economist put it, meaning it benefits the whole state in many ways, not just the jobholder.

One civic leader reminded us recently that without good jobs, no other social programs in education, health or public safety work well.

The state lacks a comprehensive economic development program. None has been done since the four economic summits of 2000-2003, led by the University of Wisconsin, and the Be Bold task force of 2010, led by major stakeholders in the state.

With the state running at half speed on job creation, and the Republicans in complete control of out statehouse, maybe it’s their turn to come up with one.