How did we get so far off the tracks in the Foxconn train wreck in Racine County?

At the bottom of the debacle were two major pieces of flawed strategic thinking running all the way from the Oval Office to the then-governor’s mansion, to leaders of the GOP-led legislature.

The first was the failure by Republicans in the White House, the state house and the GOP-led legislature to deal with hard realities. It should not have taken so long to figure out that the executives at Foxconn are not reliable, fair-minded partners. They have walked away from well-documented commitments with other countries for similar deals. They have history of abusing their vendors.

Our leaders failed to understand that we were a pawn in an international chess game of trade deficits and the outsourcing of jobs. Trump made it his number one issue in his first campaign and in his first two years in office. He played tough guy with tariffs on Chinese goods. Foxconn, a wily Taiwanese company whose massive, de-humanizing plants for making electronic devices are in China, threw Trump a Wisconsin bouquet to head off big tariffs on the products it exports from China to the U.S. 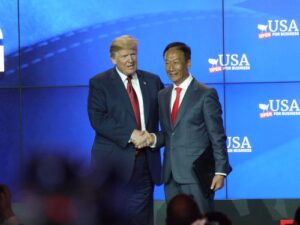 Note for the record: The U.S. trade deficit with the world has worsened during Trump’s tenure and has not improved with China. His tough guy deal-making via tariffs has failed, which surely had something to do with Foxconn’s loss of interest in bringing jobs to America.

The outlook for the partly built Foxconn campus in Racine, mostly a ghost town, and its innovation campuses around the state, mostly empty, will be even worse when the president loses big next Tuesday. No more need for Foxconn execs to suck up by staying at Trump hotels, playing his golf courses or following through in Racine.

Fortunately, Mark Hogan, who headed the Wisconsin Economic Development Corp. when the Racine deal was cut, tied $3 billion in subsidies for 13,000 promised jobs to actual jobs created and to investments actually made in plant and equipment vs. $10 million promised.

The Evers administration is exercising on those clauses and not paying the subsidies. It is staying civil with Foxconn publicly on the outside chance that the Taiwanese company does something here some day.

Meanwhile, you can get a good deal on one million square feet of space, five percent of what was originally promised to the president and Gov. Walker. Trump, who also has trouble with business reality, doubled down on being snookered recently when he said, “Great news on Foxconn after my call with Terry Gou (Foxconn CEO).” The news afterward has been far from “great.”

The same goes for the general economy. We are in the Trump Depression. He can’t blame President Obama for collapse after four years in office. He has tried to blame the Foxconn calamity on COVID 19, but Foxconn Wisconsin was on the skids long before COVID.

The second leap off the tracks was more general. It was betting on flawed strategic thinking that recruiting businesses from elsewhere will lead to Wisconsin prosperity. For decades, the leading government concept in Madison for job creation has been recruiting. The problem is that poaching from other countries or states hasn’t worked very well in the land of frozen tundra. We have hit some singles and few doubles, but reality is that it has largely been a less than stellar strategy. After 50 years of recruiting, you can count the number of big wins on a couple of hands. Long and short, that old dog won’t hunt.

Foxconn was an almost desperate quest for a home run. It was more about politics than good business. A business would have approached such a bet in stages. They wouldn’t bet the farm.

I know this sounds like second guessing. And I confess to having been involved in a couple of recruiting misfires. But we have to learn from our mistakes. And Foxconn has been a whopper. Let’s face up to it.

Of course, we still have to put out the red carpet for firms that want to expand in our state. A recent positive example is the expansion of Milwaukee Tool in the M7 region, most recently to West Bend.

Where then to go for a growth strategy? The four Wisconsin Economic summits of 2000-2003 mounted by the University of Wisconsin under President Katherine Lyall are a good place to start. It involved several hundred smart leaders from across the state. So is the Be Bold Strategy effort of 2010. Both recommended an emphasis on economic clusters which marry education,  technology development, government support and entrepreneurship.

One of several emerging clusters is the development of a freshwater cluster. It’s very strategic for Wisconsin.

The leaders of the two strategy exercises for the new century also recommended bold investments in the entrepreneurial ecosystem. Recent research had shown that entrepreneurs are the ticket to the promised land. They are the source of most all new net jobs.

The state’s best economic development thinkers called for a $1 billion investment in new ventures over ten years. The concept never saw the light of day. Instead the state bunted. The state played small ball and came up with $25 million for a fund of funds in 2014. It’s been too small a dent in job creation goals.

Think then about the $400 million that state governments have already sunk into the infrastructure for their Foxconn adventure.

A high tech, high growth startup can be launched for about $1 million. Some 400 such ventures could’ve been launched with that money. If just a dozen of them made it to the big time, the state would’ve been way ahead.

If the $3 billion in promised Foxconn subsidies were put on the table, another 3000 high-growth ventures could be created.

There always needs to be follow up money for successful ventures, and that expansion money remains in short supply in Wisconsin. There a good number on the launch pad that could accelerate quickly with several additional rounds of venture-capital.

The state 25% investment tax credit for people with the guts to be angel investors has been the single biggest economic development success the state has seen. Representative Rob Hutton has push for 40%. It hasn’t gone anywhere.

Long and short, the state has to get its  head on right when it comes to job creation. Not only do entrepreneurs create most of the jobs that stick, they also create huge value with new products and services.

Finally, it’s worth noting that all of the great employers in Wisconsin, with just a few exceptions, started here. They weren’t recruited.

CORRECTION: An earlier version of this article incorrectly stated the location of the Foxconn campus as Kenosha County. It is, of course, located in Racine County. Apologies for my initial error. ~ John Torinus