As the Department of Natural Resources turns 50, it’s appropriate to take note of the remarkable environmental and conservation progress since its birth, while remaining mindful of the need for enlightened governance and balance between the use of our natural assets and their preservation 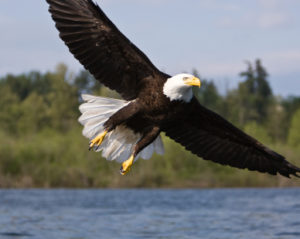 Think of our natural assets, with which Wisconsin is blessed, like a monetary endowment. It’s fine to use the earnings for current spending, but wise to protect the principal, never to be invaded.

The Kellett Commission on Government Reorganization of 1967 (I covered it as a young reporter) recommended that the longstanding Wisconsin Conservation Department be merged with the Department of Resource Development. Thus, the modern DNR was created and went into effect on July 1, 1968 with broad oversight of our waters, some of our sensitive lands, our air quality and disposal facilities.

It was a bipartisan reorganization and commitment to preservation of the state’s most valuable assets, its natural resources. It was developed under Republican Gov. Warren Knowles, an avid outdoorsman and conservationist, and implemented under Democratic Gov. Patrick Lucey.

Regard the advances over the last half century:

• A cleanup of our rivers, some of which (the Milwaukee, Fox and Wisconsin) had deteriorated into municipal and industrial sewers. It took most of the 50 years, but they are now swimmable and fishable again. (I stopped swimming in the Fox in 1953.)

• A reforestation of a state where loggers like my grandfather had laid bare the pine and hemlock expanse. Much of that restoration preceded the creation of the DNR and then carried forward. (The state sent boys like me to Trees for Tomorrow Camp in the 1950s.)

• A major improvement in the quality of our air. Southeastern Wisconsin went from non-attainment of federal air standards to attainment through industrial advances, emission testing of cars and new control technologies. (Point in case: through technology, Serigraph has moved from 170 tons of annual ozone causing emissions to 24.)

• The fast growth of the land trust movement in Wisconsin. Operating at the local level with a combination of private and state funds, 46 trusts have protected more than 200,000 acres. Almost all the preserves are open to hunting, fishing and a range of other outdoor activities at a time when most private lands have been cut into parcels private and restricted.

• The return and revival of many species like the American Eagle, Sandhill Crane, near record levels of waterfowl, turkey, pelicans, elk and wolves. Astute management of the deer herd, always controversial, and the sturgeon fishery, are other examples of successful management.

That is just a broad overview of what has worked in a near-spectacular manner for the people of Wisconsin in the DNR tenure. At this juncture, though, there is cause for concern that the balance is being lost, that in some cases we are depleting our endowment and at times over-reaching on regulation.
Partisan politics has entered the environmental arena.

Here are some current Wisconsin issues where the green-and-gold balance between the environment and the economy needs to be re-established:

• Invasive species have devastated the Great Lakes, almost certainly introduced by ballast waters from ocean-going ships. The damage to the world’s largest supply of fresh water is almost beyond economic calculation. Yet Republican Sen. Ron Johnson voted last week to turn over ballast water regulation to the U.S. Coast Guard, which is ill-equipped for the task, instead of the EPA. Our senator’s aides said it was a matter of day-to-day “commerce.” Wrong: it is a matter of asset protection. Instead, Sen. Johnson should do the financial equations and lead on closing the St. Lawrence Seaway. That project gone wrong is the door for species-laden ballast water from ocean freighters that provide a meager 5% of the traffic on the five lakes. Rail and trucks can do the job little added cost.

• Asian carp are about to invade the Great Lakes. Again, the damage will be immense. Wisconsin leaders need to lead the closure of the Chicago Drainage Canal, which carries minimal barge cargo but offers an upstream passage for the carp. Canal controls are proving inadequate.

• The EPA led the charge to lower ozone causing emissions by lowering the VOC standard from 85 parts per billion in the air in Southeastern Wisconsin to 70 in 2015. Enormous effort and investment got us there. As is the pattern for regulators, the EPA wants even more. It is proposing 60 to 65 parts per billion. Gone is the balance. The lower standard will require huge added investment?

• The air odors and manure effluent from CAFOs, concentrated animal feeding operations, are causing major problems for communities. Technological solutions, such as bio-filters for odors, and digesters and sewer plants for manure, need more R&D for better performance. For example, bio-filters can control odors.

• The impact of high-capacity agricultural wells is not entirely clear. Research on the impact of ground waters in central Wisconsin is a high priority.

• The dead zone in the middle of Green Bay is a puzzle. Where are the university researchers in finding root causes and our politicians in finding solutions?

The green-and-gold legacy of Wisconsin is conservation leadership, innovation and citizen support to meet these major challenges to our endowment of natural resources. The next 50 years need to be as fruitful and the last 50.