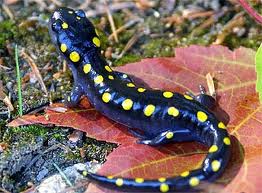 “Doctor Herp” called about 6 p.m. on a cold and rainy night recently and asked if we wanted to check out salamander matings in an ephemeral pond on a choice piece of Kettle Moraine land.

I declined and headed for the hot tub, but my wife Kine, educated as a biologist and a hugger of all species, said yes. She donned her waders and joined Gary Casper, the state’s best-known herpetologist, for what they considered an ideal outing.

They happily reported that the wet spring had a positive effect on biological processes and that there will be an abundance of small herptiles later in the season.

Of note, the property is owned by the Cedar Lake Conservation Foundation and was purchased with a grant from the Wisconsin Stewardship Fund. Critics of conservation efforts may sneer at the preservation of friendly environs for salamanders, but they are misguided. If the salamanders, toads and frogs are in trouble, we are in trouble, too.

Let us count the ways that preserved lands and the Stewardship Fund make a difference in our lives:

• Hundreds of cross country skiers use the same land east of Big Cedar Lake during the winter months on trails groomed by volunteers from the Fox Hill Nordic Ski Club. They make for a healthier community.

• Even more hikers, birders and dog walkers use the trails in the other three seasons. Open access is guaranteed under Stewardship rules.

• The ephemeral ponds allow for slow absorption of rain and snow melt back into the underlying aquifers and filter the run-off to Cedar Creek, the Milwaukee River and eventually Lake Michigan. Those would be our drinking waters.

• The lands surround Fox Hill, one of the finest kames in the Kettle Moraine, thus protecting its scenic contribution to our county.

This encounter with the salamanders may not seem pivotal in the grand affairs of mankind, but it embodies some larger issues that we need to be thinking about. And it is a timely issue because a group of accounting types in the Republican Part have raised the possibility of deleting all the funds for the Stewardship program.

The fund, which was created by bipartisan cooperation between Democratic Gov. Gaylord Nelson and Republican Gov. Warren Knowles, has spawned the creation of 55 land trusts in Wisconsin. These trusts, along with other organizations like Trout Unlimited, Pheasants Forever and The Nature Conservancy, have been providing the matching funds to protect lands that can be used for hunting, fishing, hiking, skiing and all manner of recreation.

One of the most active has been the Ozaukee Washington Land Trust, which has protected more than 5000 acres, much of it along the banks of the Milwaukee River. Along with funds for absorption areas from the Department of Natural Resources and the Metropolitan Milwaukee Sewer District, Stewardship dollars have mitigated downstream flooding. That indirectly helps to cut raw sewage outflows into Lake Michigan.

The Republicans cut the funding for Stewardship from $83 million to $60 million for the very tight 2011-2013 budget. It was necessary because of the huge deficit entering that biennium. But the economy is stumbling to higher ground, so the austerity argument no longer applies. (In comparison, the Republicans in Madison are dumping more than $600 million in new dollars into the under-managed Medicaid program.)

Meanwhile, we’re not doing so hot when it comes to protecting our natural resources. West Bend is down to 700 feet for drinking water; it was 50 feet in the old days. Germantown is drilling down to 1200 feet. And Waukesha’s wells are sucking radon. A lot of municipalities are considering a default to Lake Michigan water.
Lake Michigan levels are at all time lows.

Here’s are pieces of the assessment: “Generally, turbidity readings in the two watersheds (Kinnickinnic and Menomonee) were very poor; dissolved oxygen and chloride grades were only mediocre; and both received failing grades for phosphorous, conductivity and indicators of bacteria.”

As for the Washington County parts of the assessment, “The Milwaukee River Watershed, consisting of the North Branch, East and West Branch and South Branch watersheds. as well as the Cedar Creek sub-watershed, dropped from a B- to a C in 2011. “ Some of the metrics were OK, but the whole watershed received an “F” for conductivity, phosphorous and bacteria.
Filtration helps all of those issues, which is why the land trusts have been accepting easements and buying lands along the riverbanks.

I have always had a hard time figuring out why conservatives in the GOP have gone anti-conservation. Conserving valuable resources, like our drinking and recreational waters, is a conservative thing to do. It should be looked at as an investment, not spending.

Conservation is also good politics. All polls show that a large majority of Americans, including hunters and anglers, are pro-conservation.