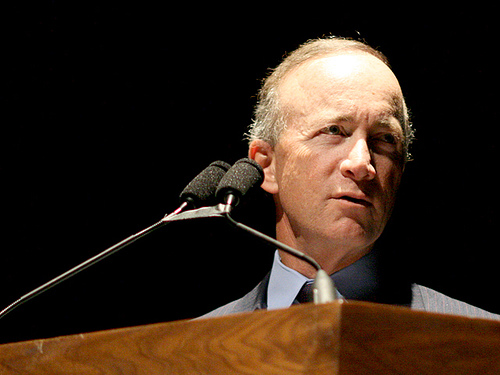 DALLAS—Gov. Mitch Daniels of Indiana is the drum major at the head of the parade to put individual responsibility back into the delivery model for health care.  He told me during a mutual visit to the Super Bowl (the Packers ruled!) that more than 80% of the state employees have opted for a consumer-driven health plan.

This proves that public payers can adopt  innovations that have enabled private sector employees to get run-away health costs under control.  Daniels said he added the necessary incentives to get to the 80% level.

Subsequently, he did the same with the uninsured in his state, and he is pushing the Obama Administration to allow him to apply consumer principles to Medicaid.

Gov. Scott Walker of Wisconsin interacts regularly with Daniels and did so at a pre-Super Bowl party.  (Indianapolis hosts the big show next year.)  Walker faces a $1.8 billion two-year deficit for the state’s 40% share of Medicaid, so he may well want to join Daniels’ parade. Walker just create the Office of Free Market Health Care to look at just such options.

Said Daniels recently, “What seems free will always be over-consumed, compared to choices a normal consumer would make.  Hence, our plan’s immense savings.”

This articulate Republican, who many would like to see run against President Obama in 2012, continued, “The Indiana experience confirms what common sense already tells us:  A system built on ‘cost-plus’ reimbursement (i.e. the more the physician does, the more s/he gets paid), coupled with ‘free’ to the purchaser consumption, is a machine perfectly designed to over-consume and over-spend.  It will never be controlled by top-down balloon-squeezing from insurance companies or the government.  There will be no meaningful cost control until we are all cost controllers in our own right.”

There are literally hundreds of millions of dollars to be saved if other governors follow Daniels’ lead.

It’s a certainty that the president and Katherine Sibelius, his Secretary of Health and Human Services, will not grant Medicaid waivers to allow market disciplines to come into play.  But 2012 is just around the corner, and health care costs will resurface as a major issue in the next presidential election.  ObamaCare didn’t lay a glove on the run-away costs.

The inflationary pain of those health costs on government budgets will make Daniels look like a savior.  Medicaid will be restructured one way or another.  The present financial hemorrhage is untenable.

In Wisconsin, expect Gov. Walker to embrace the Healthy Indiana approach. Expect other GOP governors to follow suit. Even Democratic governors will have to move to such cost controls or to rationing of what’s covered.