Avid golfer Donald Trump hit an iron off the tee with his first run at repealing and replacing Obamacare. Predictably, it fell short. 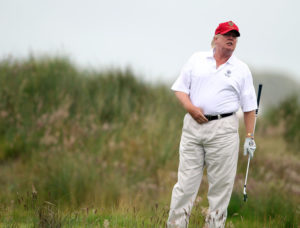 It’s time for him to get out “the big dog,” the driver, and hit the long ball. The GOP’s first rendition of “repeal-and-replace” was accurately dubbed Obamacare-light, and it didn’t fly. It was more about Republican ideology — entitlement reform, smaller government and tax cuts — than health care reform. There was no over-aching vision for the American people to grab onto.

Learn from that, President Trump. Call for a bolder reform of what ails American health care. Come at this Gordian knot in new ways. Outflank the opposition. Keep remnants of Obamacare to attract Democratic votes.

In that vein, leave the private insurance market alone for now and concentrate on what’s doable in the failed GOP plan quarterbacked by Speaker Paul Ryan, namely, turning Medicaid over to the states. That’s where the big taxpayer money lies. GOP leaders largely agree upon block grants as a cure for Medicaid, so there is some open fairway to land on.

Further, Medicaid is the worst managed and the most out-of-control expense at both the state and federal levels. In Wisconsin, for example, Medicaid has ballooned to $8 billion per year – roughly $5 billion from the feds and $3 billion from the state. (Medicaid will soon pass state spending on K-12 education.)

Trump could make the current $5 billion level an annual baseline that would be enhanced by an inflator at the Medical CPI each year.
Then get the feds out of its management. Turn the states loose to innovate. We would have 50 pilots coming up with cost savings and care improvements. Gov. Walker, for instance, wants to add job search and drug testing as eligibility requirements.

He, or other governors, would also adapt proven private sector reforms to Medicaid management, including:

• Incentives and disincentives in the form of high deductibles and coinsurance, offset by a Health Reserve Account. Consumer-driven plans save 20%-30% at private companies. Poor people will behave in a similar way as other consumers; if it’s their money they’re spending, they will spend more wisely.

• Set up medical homes to offer proactive primary care for the poor. Keep them out of expensive (and dangerous) hospitals whenever possible. Some community clinics are already in place, but not enough of them.

• Let medical providers compete to manage the total health of groups of Medicaid recipients. The most effective get more business the following year, and vice versa. All pilots along these lines have worked exceptionally well.

The president could even bolder:

• He could promise to toughen up antitrust enforcement to keep competition in place among health insurers and big health providers. Prices only go one way when the combine, and it’s not down.

• He could tax the earnings of big non-profit hospital corporations. For the most part, they act nothing like non-profit organizations. They pay enormous salaries, reform slowly and spend heavily on lobbying and advertising. President Trump could use the added tax revenue to pay for high-risk coverage for people with pre-existing conditions and catastrophic medical bills.

• He could convert the troubled Veteran’s Administration into a voucher program to allow vets to tap the more effective private health systems. Close down the VA hospitals; raise value for veterans and save tons of money.

• Prohibit drug advertising, as was accomplished with tobacco. Smoking kills people. High drug prices bankrupt people. They gouge companies with pay for employee health plans. (We have five people at our company using Humira for arthritis, a highly advertised drug, at $43,000 per year per person. That’s unsustainable.)

• Require fixed prices from all providers for “bundles” of procedures. The American consumer and their employers deserve full transparency on staggering medical prices. Such consumer protections already exist for other major consumer products, such as mortgages, cars, houses and 401(k) management fees. Medicare already pays in bundles. There is precedent.

• Regulate prices for monopoly or duopoly drugs, where pharmaceutical has people who are hurting over a barrel. Remember that federal research money from taxpayers was often there on the front end of drug development.

• Allow importation of drugs, always far less expensive than U. S. prices for the same drug. Inspect foreign plants and supply lines to ensure quality equivalent is guaranteed. Take away the quality argument from pharma lobbyists.

The most well heeled lobbies in the world resist each of these obvious reforms. So will state and federal agencies, where the bureaucrats often align with the medical industrial complex.

President Trump said he was going to drain the swamp and help the American people. Here’s his chance. Bloated health prices are costing each American home more than $3000 to $5000 more than they should.

Mr. President, let the “big dog” out of the bag, grip it and rip it.