Whither health care after election? Who knows?

Pre-campaign, the biggest issue facing the 2020 candidates was the cost and coverage of health care in America. In normal times, the political campaigns of President Trump and former Vice President Joe Biden would have clarified their game plans for health care.

Not so much this time around. The two surviving candidates have muddled the way forward for the country.

President Trump and the Republicans never had a clear healthcare platform, except to oppose Obamacare.

Mitt Romney opposed Obamacare as his central healthcare policy in 2012, and he lost, giving Barack Obama a second term.

The irony there is that Romney had created Romneycare, the predecessor of Obamacare, when he was governor of Massachusetts. His reversal came off as politically hollow, and it had a lot to do with his loss.

Opposition to coverage for more Americans via subsidies and Medicaid expansion and coverage of pre-existing conditions didn’t fly with voters. The GOP should have learned then that opposition without a better substitute position is not a winning strategy.

Inexplicably, that’s where President Trump finds himself: no clear game plan on health care. There is no “Trumpcare.”

In the Democratic primaries, Biden soundly knocked out Sens. Bernie Sanders and Elizabeth Warren, both Progressives who pushed hard for “Medicare for All.” They were the opposite of pragmatic as they ideologically pushed for government management of the health care of all Americans, including the 160 million who are generally happy with their employers’ plans.

Instead, Biden doubled down on Obamacare as his “plan.” His team had read the polls. Kaiser Family Foundation found 79% favoring retention of the Affordable Care Act (ACA), mainly because of its pre-existing condition coverage. Trump belatedly and grudgingly said he would also protect coverage of pre-existing conditions if he jettisoned the rest of the law. He hasn’t been convincing.

There are additional ironies. The “Affordable” act is not especially affordable. Before subsidies, ACA premiums are not cheap, and its deductibles are scary high for the low-end plan.

Since ACA was jammed through Congress in 2010, average premiums on all plans, public and private combined, have risen 40% for a family of four, twice the rate of inflation.

In the decade before Obamacare, premiums were rising at double-digit rates. In the big picture, neither party has had a clue about cost management. 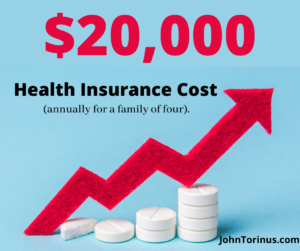 Insurance for an average family of four costs more than $20,000 per year, a ghastly number, with $5600 coming from an employee’s pocket.

There’s another huge irony in the lack of health care progress prior to the COVID crisis, which threw health care into the turmoil. Neither party has paid attention to the obvious: what was happening on the ground.

On the public sector side, there has been a sea of change in how Medicare is delivered. American consumers have flocked to Medicare Advantage instead of straight Medicare. There’s free market competition among health plans and extra benefits for consumers.

So, why not use Medicare Advantage (MA), which is sold by health insurance companies, as a platform to replace Medicaid and Medicare? Consumers like it. Let needy citizens opt into MA — and companies, too. That would be real reform. Dump forever Medicare for All, a non-starter politically and financially.

Second, many private companies, most of which are now self-insured, have an established “medical home” for their employees. These are often on-site or near-site primary care clinics that offer:

Every health plan could be required to include such a medical home. That change would save 20% to 30% and constitute real reform of Obamacare. The savings have been demonstrated by many private companies.

Third, smart companies are cutting through the incomprehensible pricing maze in U.S. healthcare by going to bundled prices: one bill for a procedure beginning to end – often at half of the current ala carte prices that rule the day. That pricing model would be real reform of Obamacare. Big companies have proved it works.

The savings from those reforms, if applied more broadly, could pay for coverage for the uninsured. It would constitute universal coverage.

The problem: political candidates do sound bites cooked up by wonks who have never paid the bills for a healthcare plan. They don’t listen or learn about for innovative reforms.

The election is two weeks out. At this point, neither candidate offers much hope for healthcare reform.

One positive from the campaign: Medicare for All – price tag unknown — died a decisive death.