BOZEMAN, MT – This boomtown that sits prettily in the Gallatin Valley surrounded by six mountain ranges is finishing its sixth update of its comprehensive community plan since it started serious planning in 1958. 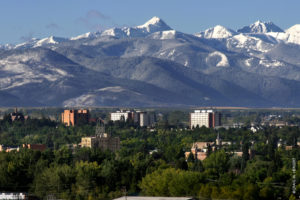 Bozeman has a lot going for it that propels growth. It is the gateway to Yellowstone Park and the trout-filled Gallatin and Madison rivers. It is also home to Montana State University, a hub of science and technology degrees and about 17,000 students. It is a major retail hub for southwestern Montana and a business center.

In Bozeman’s strategic plan, which was reworked in 2018, the major goals were listed as livability, affordability, and the concept of “connectedness.” The latter applies broadly to its transportation system of roads, trails, bike routes, but also the integration of its overall community plan with its sub-plans, such as for economic development, transportation, housing, neighborhood and downtown development.

Each sub-plan is reviewed regularly by a staff of six planners and the community. Fast growth brings a lot of challenges, which Bozeman has met with intensive planning.

That devotion to planning draws a contrast to West Bend, where, perhaps because of slow growth, planning has not been high on the community radar screen since 2004 when Mike Miller was mayor.

West Bend has a planning office inside the community development department, which is staffed by two professionals. The city’s comprehensive 2020 master plan was adopted in in 2004 – 15 years ago. It was a plan to take the city to 2020. There were three amendments by the council in 2013. The city’s transportation plan was updated in 2010.

Lots has happened since 2004 and 2013, so the city is way overdue for another comprehensive planning exercise. The existing plan runs until 2020, which is upon us. The updated Bozeman plan looks forward to 2040.

West Bend will have a new mayor next April and our city administrator is relatively young in the job. What better time to step back, assess where we are and do a 2040 plan for our future?
There was a city visioning session back in 2011. It adopted by the mayor and city council. The vision, which is not a comprehensive plan, never got much attention, but could serve as a starting point for a fresh strategy and plan.

West Bend is not a boomtown. It hasn’t added much population since 2010. But recent developments suggest stronger growth over the next decade. West Bend Mutual keeps adding people, now at 1300 and growing. It keeps adding new states to serve. Delta Defense, more than 250 people at last count, is also growing fast.

In some ways, the city has done some brilliant developments in recent years. It has done a great job of highlighting its share of the beautiful Milwaukee River. Bozeman Creek, by contrast, has been covered over as it moves through downtown Bozeman.

There was a move to do just that in West Bend in the 1970s. The proposal came from a fancy consultant from New York. But it was so ill-advised that the city leaders never let it get off the launch pad.

West Bend took a huge step to elevate its river asset in 2018-2019 by renovating its east bank downtown. It will do the same for the west bank in 2021. Brilliant! Kayaking and fishing are emerging downtown. Earlier, it removed the Woolen Mill dam and its filthy lagoon to create an expanded Riversite Park. Also brilliant.
Are the Barton and Highway 33 dams next?

The improvements to the Eisenbahn Trail, once controversial, have proved an outright winner.

Are the Barton and Highway 33 dams next?

Another major plus: instead of being used for a trucking depot and warehousing, the campus of the defunct West Bend Company was acquired and turned into a handsome River Shores mixed-use development.

Such is the stuff of strategic community planning.

On the negative ledger are losing the community hospital to sprawl and the westerly sprawl on Hwy.33.

On the positive side is the recent creation of industrial and commercial parks, the latest just added on the southeast side of the city.

Bozeman flunks on its affordability goal. Because of the population boom, the median house price in Bozeman is $475,000. In West Bend it is $205,000. Bozeman has responded with a housing action plan to tackle the need for more affordable housing. That’s what good planning can bring about.

Bozeman has livability in spades, centered on outdoor recreation. So, increasingly, does West Bend in many dimensions, like exemplary parks, its lively central city and excellent education at all levels.

On the connectivity score, West Bend could catch up with Bozeman with a renewed attention to forward, integrated planning.

It’s time for a fresh look.

This entry was posted in Smart Growth. Bookmark the permalink.