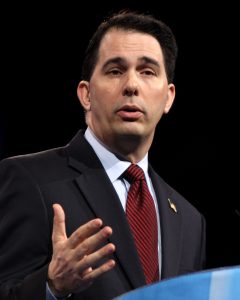 Last week’s blog on a menu of potential initiative for Gov. Scott Walker for his next two years in office drew several responses. The consensus was that he has more serious work to do, that he needs to be about more than pure politics.

His disapproval/approval ratio 49/43% stems from his leap into presidential politics in early 2015 shortly after his inauguration as governor for a second term. He came off as all-politics-all-the-time.

The message to Walker from the electorate is that they want him to take a page of Tommy Thompson’s book – a game plan that got Tommy elected four times. Thompson did the politics, but he also did the policy. He mounted dozens of task forces and commissions to tackle complex issues, like workforce preparation, export stimulation, juvenile justice and youth apprenticeship.

Gov. Walker may be receiving that message. In a rare occurrence last week, he assembled a task force to look into a tough issue, the epidemic of opioid abuse. In accordance with the Wisconsin Idea, he pulled in some of the best and brightest citizens on that subject to come up with antidotes to the crisis.

The state direly needs their ideas. And their conclusions need to be implemented on a bipartisan basis. Thompson knew how to reach across the aisle for passage and implementation on major initiatives. He worked with Democrats to combine work with welfare. (President Bill Clinton later adopted that policy architecture.)

Responders added to the list of needed initiatives that the governor and GOP legislative leaders could mount. For example, an energy expert said the state needs to do long range planning for sources and prices of electricity. Once competitive on power routes, Wisconsin has slid over the last decade to uncompetitive prices, a disadvantage for users of all stripes, including business.

Further, there will be continued and long-term pressure to reduce the use of coal as a fuel. A high level task force needs to dig into non-carbon sources of power: wind, solar, nuclear and distributed power generation vs. big plants.

There is also the policy fork in the road on deregulated business models for generating and distributing electricity vs. the regulated monopoly model that Wisconsin has ridden historically. Deregulated Illinois delivered power in 2015 at an average of about 8.7 cents per kilowatt hour compared to about 10.8 cents in Wisconsin.

Real leaders don’t duck major challenges like the future of power. Filing suits against the federal government climate edicts is necessary, but not enough.

Another addition to the state strategy mix is more state jobs for Milwaukee, where the unemployment rate remains unacceptably high. The Republicans could move whole agencies from job-rich Dane County to job-poor central Milwaukee, instead of just regional, out-post offices. The Department of Transportation office building being erected west of Madison should have been built in Milwaukee. Decentralization of state government would offer stimulus where it is needed most.

The same goes for spreading the resources of the University of Wisconsin System. A high-level examination of its structure, the first in four decades, is overdue. That case became more compelling after last week’s report that the system again lost enrollment this fall. It is down some 5000 students from last year, including more than 3000 at the 13 UW Colleges, which were gutted by the latest round of cuts by the GOP. Coupled with the cuts, losing tuition dollars is a big deal.

The 13 college campuses lost their deans in the cutbacks. It back-fired, because it hurt recruiting. The role of the colleges in a reorganized UW system is just one of the higher education issues facing UWS.

It is unrealistic to ask the governor and legislature to address the full range of state challenges in the next two years. But if Gov. Walker wants to run for a third term, as he has indicated, he needs a Second Act.

The positives about the improved state business climate under Walker are applause-worthy. But they are not sufficient to justify putting state leadership on cruise control.