President Trump ignition of trade wars will do no favors for Wisconsin, a state that helped to carry him to the White House. 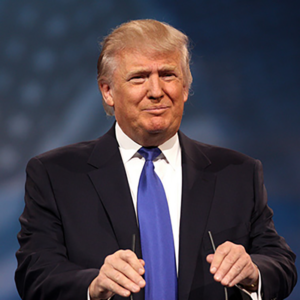 He won 10 pivotal electoral votes here in 2016, partly by promising to bring back manufacturing jobs lost to foreign competitors.

Sounds good. But, through a Wisconsin lens, there’s one big problem with that promise. In most years, Wisconsin exports about as much as it imports.

Further, Wisconsin is the second-most manufacturing intense state, behind only Indiana. That means we are big users of steel and aluminum. To the extent that those metal prices rise because of Trump’s new tariffs, they will make Wisconsin goods more expensive and therefore less competitive with products from other countries, like cars, ATVs and motorcycles.

If sales volumes drop as a result, at, say, Harley Davidson, jobs will here will be lost.
Further, there is a compounding effect. As one Milwaukee executive pointed out, the tariffs could also cause material shortages, further driving up prices of steel and aluminum. Higher prices equal less demand equals lower job numbers.

These are unintended consequences that don’t lend themselves to Twitter thinking.

Further, jacked up U.S. tariffs will almost certainly lead to retaliatory counter-tariffs. Some will be directed at Wisconsin companies to pressure Speaker Paul Ryan. That means taxes on exports like specialty cheeses, Harleys and cranberries. More lost jobs.

President Trump is already waffling on how many countries the metal tariffs will apply to, exempting Canada and Mexico, both significant steel producers.

The major trade imbalance is with China, in the country and in Wisconsin. In 2017, Wisconsin did have a trade deficit, but almost its entire deficit is with China — $1.7 billion in exports versus $7.1 billion in imports. That pattern holds true at the national level.

In short, President Trump’s “America First” rhetoric has not dealt with the major part of our trade deficit. He has talked about bilateral trade negotiations to lower the long-running trade imbalance with China, but he hasn’t done it.

Instead, he has messed with our neighbors, including Canada, our best ally in the world. He is tearing up NAFTA, which made North America a trading oasis where needed goods and services flow freely, with the exception of some sensitive products like lumber.

He pulled out of the trans-Pacific trading pact, leaving doors wide open for Chinese exporters across that huge part of the world.

American companies have learned to play the international trading game. So, with a few exceptions, I haven’t heard them asking for trade protection. Wisconsin Manufacturers and Commerce, the state’s biggest business lobby, which usually lines up with Republican positions, has opposed the Trump tariffs.

My company, Serigraph, which sells graphic parts to the U.S. steel and aluminum users, is not asking for tariffs. Our exports result in about 25 jobs in Wisconsin that wouldn’t be there otherwise.

Thanks to lean disciplines, our plants in West Bend, Wisconsin and Mexico can compete in North America with makers of similar products anywhere in the world. We lose a few jobs to overseas companies, but not many.

Our president might want to talk to manufacturers in Wisconsin before implementing his counter-productive tariffs.

And, he might want to talk to Warren Buffet, the wise investor from Omaha. Buffet has supported balanced trade negotiations with China for several decades. He has proposed a chit system, under which China could only export more to the U.S. if it imported the equivalent amount.

Trump tweets tough on trade, but how tough is he if he doesn’t tackle China?