Tommy to the Rescue

Wisconsin has been desperately searching for leadership to get through the COVID epidemic that has ripped up the state. Fortunately, we finally have a leader who is stepping up to confront the monumental challenge. 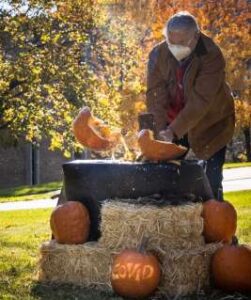 He is a well-known commodity. It’s our former four-term governor Tommy Thompson who recently became interim president of the University of Wisconsin System. Tommy always was a real executive in addition to being a politician. He knows how to launch initiatives that crack through on difficult problems. Tommy got his hands on 150,000 antigen tests and rapidly moved to mobilize the 26 UW campuses to deliver the tests. He didn’t get bogged down by the huge UW bureaucracy. The tests began on most of the campuses last week, and they worked very effectively.

My wife and I had trouble getting tested in the past because we were asymptomatic. We couldn’t get through the phone lines to any testing bodies, including the Washington County Health Department whose phones were overloaded. We had to call a private doctor service to get our first test. We have followed all the safety rules, and we were negative three months ago.

We were thinking about the holidays with our close family and wanted to get tested again. So, we jumped on Thompson’s plan. It was super slick. (We subsequently vetoed family holiday gatherings of any kind.)

We went online to make our appointments last Wednesday. It was easy-peasy. We selected our own time slots to arrive at the gymnasium on the University of Milwaukee at West Bend Campus.

The signs were clearly marked, there was plenty of parking, and the firm that the university hired to manage the process was waiting at the door to guide us through the steps. We were given nasal swabs to self-test.

We were promised our results in 25 minutes, which is an incredible feat. Most people waited spaced to get their results in the gym.

Luckily, ours were again negative. If a test were positive, a second, more definitive test called PCR was administered to make sure that it was not a false positive, to make sure the person was indeed infected.

Hundreds of people showed up — with masks on — even though there wasn’t much pre-publicity. Further, it was free to students, staff, and the whole community surrounding the campus. (For some reason, the University of Wisconsin-Madison decided to wait until January to launch its testing program.)

Thompson will have to find more sources for the tests to keep the program going across the whole state, but his game plan is the right one. The two medical colleges have the dough — $800 million for public health– in a Blue Cross endowment for public health. With support, he would tap those dollars.

The consensus of the virus experts is that the best approach while we wait for a vaccine is to test, test, test; then trace, trace, trace; and then quarantine those testing positive. The burst in positive cases has ruled out that sequence because of current staff shortages.

We are all excited that three drug companies have announced that they have developed an effective vaccine. That promises to be the real end game, even though there will be a host of issues surrounding the logistics of distributing the vaccine to more than five million people in Wisconsin.

Tommy’s next big solution could be aimed at the severe nursing shortage. Nurses are burning out and dropping out. Thompson could release senior UW nursing student to the front lines of the COVID WAR. They could get paid, cut their student debt and earn their final credits there.

Our Republican legislative leaders finally met with Democratic Governor Evers last week, but so far, no game plan has come out of it. If they need direction on a joint plan, they need look no further than Thompson’s roll-out of the antigen test.

Tommy understands leadership. He knows sometimes it involves theatrics to get the word out. Some have criticized his use of a bowling ball to smash plates, vases pumpkins, and his 79th birthday cake to demonstrate how to smash COVID-19. Too hokey? Not for me. His antics were an appropriate way to get attention, to circumvent a bureaucracy and get past the partisan politics.

It was vintage Thompson when he tweeted, “Time to put the hammer down! Mask up, Get Tested. Quarantine if needed. SMASH COVID! Love the leadership.

This entry was posted in Coronavirus Battle. Bookmark the permalink.