If there were ever a hall of fame in our community for entrepreneurs—as there should be—at the top of the list would be Lehman Rosenheimer. 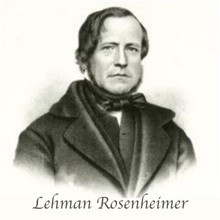 We have been blessed with many wonderful business people who started companies during our almost two centuries of history, and there would be little argument that Rosenheimer, an immigrant from Bavaria in 1840, would lead the parade.

Members of the Cedar Lake Conservation Foundation were privileged to hear a close-up and personal account of his 58 years of life at a gathering earlier this month at the West Bend Country Club. The Rosenheimer clan is extensive and has often been distinguished.

Long hours of research by Heidi Rosenheimer Anderson, her husband Ross and “Lay” Rosenheimer as raconteur pulled together some fascinating history of the clan.

He was born in Dormitz, Bavaria in 1820 and emigrated to America when he was 20 years old. He had $200 in his pocket and could not speak English. He left Bavaria because he was the youngest son in a large family and his father’s inheritance passed to the oldest child.

The young Rosenheimer landed in New York and got his start milking cows on a farm. He was right at home with cows because his father was a cattle merchant.

Not one to be stuck in the status quo, he decided to head west for Wisconsin, along with many fellow Germans, because of its similarity to Bavaria.

His first venture was a partnership in a hotel and tavern near the pier where Great Lakes steamers landed their immigrant passengers. The site later became the depot for the Chicago Northwestern at the end of Grand Avenue in Milwaukee. The location is now home to the Betty Brinn Museum.

He did well enough to afford a trip back to Germany to see his family. After he returned, he became deathly ill with typhoid fever. He was nursed back to health by Barbara Herbst, a 15-year old maid at the hotel. He was of Jewish descent; she was Lutheran. In the melting pot of America they fell in love and married.

That was the beginning of a large family legacy. Nine of their eleven children survived and some followed his path into business. Lehman and Barbara moved to Washington County where her parents were immigrant farmers in the town of Addison.

They bought a farm in 1844 and began raising and butchering cattle like his forebear.

With the confidence from owning a good business, he expanded to include what became the Stork Brewery, a farm implement dealership, a lumberyard, the post office, a bank, a grain elevator and a brickyard that was said to produce 25,000 bricks a day.

Collectively, they were referred to as the “House of Rosenheimer.”

One of his sons who grew up in the retail business, Moritz, branched out to start the L.P. Rosenheimer Department Store in Kewaskum. His 15-year old brother Adolph joined the company as it expanded. It operated for 100 years and still stands as an antique mall. As with their father, their entrepreneurial fires kept burning to include a grain business, a creamery, a malting house, another bank, a fire insurance company, warehouses, a farm implement company, a grain elevator, and what was to become Regal Ware, a manufacturer of aluminum kitchenware.

The family’s long legacy of starting prosperous businesses continued in 1895 when son John bought back a 28 acre resort on land the family had once owned. He built one of the most popular resorts in Wisconsin that included a saloon that served Stork’s beer for 5 cents a pint. It included roller skating, a huge water slide, a swimming beach formed by placing sand on the ice in winter, a tour boat “Witch of the Waves” that offered tours for 25 cents. It also delivered mail around the lake.

In 1920 the entrepreneurial thrust of the family continued. John built a large octagonal shaped dance hall that had a capacity of 1400 dancers. As the Roaring Twenties took off, the resort attracted big bands led by Guy Lombardo, Jimmy Dorsey, Lawrence Welk, Arch Cassal, and Louie Armstrong. The dance hall was packed every weekend until it closed for the winter.

The resort property was sold to the Cedar Lake Yacht Club in 1957.

Who can measure the level of prosperity generated in Washington County by Lehman and his offspring? 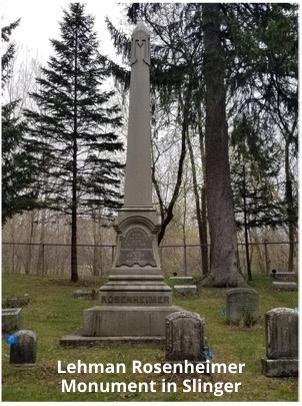 He was also a loving family man who created the Rosenheimer family cemetery in Slinger in 1855. He told the Milwaukee Journal before he died in 1878 he desired that family members gather at his grave on each anniversary of his death on September 21, 1878 so they might be reunited often and grow stronger as a family.

They have done so for 143 years at the Rosenheimer Cemetery with only one exception to his request: Lay Rosenheimer said the meeting is set every September for a weekend close to Lehman’s birthday that does not conflict with the Packers or Badger football games.

The drive, ingenuity and vision of these entrepreneurs enabled family livelihoods, supply chains of other companies, the creation of schools, roads, churches, hospitals and libraries.

How about a hall of fame for these men?

This entry was posted in Entrepreneur Hall of Fame. Bookmark the permalink.