← Next UW prez should be seasoned executive 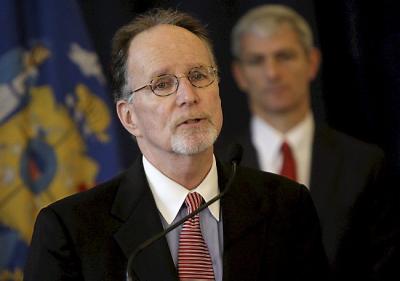 FILE – This Dec. 19, 2011 file photo, University of Wisconsin System President Kevin Reilly attends a ceremony where Gov. Scott Walker signs an executive order concerning mandatory reporting requirements for child abuse and neglect at University System at Chapman Hall on the University of Wisconsin Milwaukee campus. Reilly announced his resignation on Tuesday, July 30, 2013 following a tumultuous six months that saw an angry backlash from the Republican-controlled Legislature over how the university was handling its money. The UW System said in a statement that Reilly will leave to advise the American Council on Education in January 2014 and return to teaching. He’ll continue as the UW System’s chief executive through the end of the calendar year. “We overcame financial headwinds to build a higher education system that expanded access to college classrooms for Wisconsin families and responded to the needs of our economy for skilled graduates able to compete and succeed in a global economy,” Reilly said in the statement. (AP Photo/Milwaukee Journal-Sentinel, Mike De Sisti)