Give Rep. Dale Kooyenga and Assembly Republicans credit for thinking big about Wisconsin’s tax base. 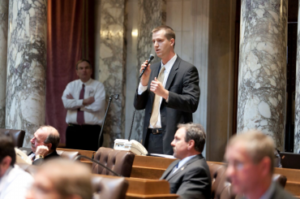 His Assembly bill that addresses the biggest sore thumbs in the current tax posture of the state has drawn skepticism from Gov. Walker, some Republican legislators and, of course, Democrats.
Yet, the bill advanced by Kooyenga and fellow assembly members goes right at taxation issues that keep Wisconsin from being a more competitive state. That is no small matter because job and wage growth here are generally ranked in the bottom third of the 50 states.

Even though our unemployment rate is better than average, and Chief Executive Magazine just ranked Wisconsin 10th for business, we remain a slow-growth state.
The Kooyenga bill addresses these major competitive issues:

• Our state income tax is among the highest in the country. His bill would set a path over the next 12 years to replace the current three brackets with a flat 4% tax. That reduction and simplification would make our tax climate much more attractive. Wisconsin has an exodus of 10,000 college graduates every year, and taxes no doubt play a major role in that unacceptable loss of talent.

• Wisconsin’s economy relies heavily on manufacturing, agri-business, trucking and tourism – all dependent on a first-class state highway and local road structure. Kooyenga would lower the gas excise tax by about five cents, but apply the state’s 5% sales tax to gasoline. That would boost revenues for transportation projects and offer an inflation hedge in future years.
• His higher gas tax revenues would reduce bonding for transportation projects. Debt service already chews up one of every five dollars going into the state transportation fund.

There are lots of ins and outs to any major tax reform proposal, and there are always winners and losers. Those need to be worked out so there are way more winners than losers.

Under the Kooyenga plan, many tax credits – all sacred cows to some interests – would go away, but so would the state’s alternative minimum tax. These are all relatively obscure pieces of our tax labyrinth. They do nothing to define the perception of the state’s tax and business climate.

The Assembly Republicans But taxpayers and political leaders are keeping their eyes on the main prize. That would be the perception and reality of the state as a competitive economy. Prosperity of the people in the state is the end game.

That goal was clearly in the minds of GOP leaders when they built Gov. Walker’s first-term budget. They surprised the business world by creating an exemption from the state’s 7.9% corporate income tax for manufacturers and agri-business companies. That’s a huge positive when leaders in those two sectors consider expansions. That major tax break really does say that the state is open for business in those two industries.

That said, Wisconsin can’t rely on agri-business and manufacturing for major job creation in today’s world; both have become uber-productive, and that trend is not going to change. Production will rise, but their job totals will not grow much. The transition to automation and robots is real.

In that vein, the new budget is inert on the need to accelerate the reinvention of the state’s economic mix through entrepreneurs; major gains have been made on that front, especially in Milwaukee, but we need to go even faster.

There is another dimension to the Kooyenga initiative. What is being proposed by the Trump Administration at the federal level for tax reform reinforces the merits of a lower 4% flat tax at the state level.

The Trumpsters propose to pay for lower federal taxes in part by eliminating the deduction for state and local taxes. No longer will the high Wisconsin income tax (7.65% in the top bracket) be mitigated by deducting it against federal taxes.

On the plus side, Trump’s proposal to lower the federal corporate rate to 15%, including pass-through corporations where business taxes are paid at the personal level, will leave a lot more money in business coffers – capital that can be used for investment and expansion.

The same could be said of the Kooyenga 4%. It will leave more funds in pass-through corporations for reinvestment.

In short, the Trump reforms could work hand in hand with the Kooyenga reforms. Business could be doubly stimulated in Wisconsin.

As for the big picture, the state’s economy and business climate are in better shape than they have been for a decade. That acknowledged, we can’t just put them on cruise control. Remember the Great Recession just a decade ago? Who can forget?

There will be other downturns ahead. The best protection is a robust, diversified economic platform before a storm hits.

The Assembly GOP plan breaks new ground. It’s bold, and bold is what we need in a state that has long been behind the growth curve.