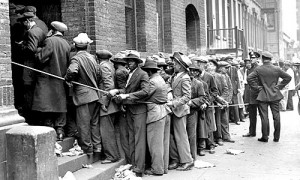 Tax riddle of the day: why are politicians so happy to extend unemployment benefits, some as far as 99 weeks?
It’s partly because the safety net is really needed in an economic collapse like the one we have endured for three-plus years. Mainly, though, it’s because it’s easy for lawmakers; they don’t have to pay for it.
Businesses do, 100%. General tax revenues are not involved.
The safety net for unemployed workers has produced a monumental debt during the extended downturn. As of last month, 31 states had run up a $47 billion debt with the federal government.
Wisconsin, my home state, went from a $1.8 billion surplus in 2000 to a $1.6 billion debt today. Trust funds in other states are under similar siege. The Wisconsin debt comes to about $500 per worker.
That kind of hemorrhage will, of course, require a tourniquet. It will mean business tax increases and probably some minor restrictions on payouts.
In an economy still in rehab, it’s hard to see major relief from lower levels of benefit payments or lessened draws on the fund. The only other available triage is a tax increase on business.
The tax increases will probably take these forms: the income base for the charge for unemployment insurance (UI) will rise from the first $13,000 of employee pay to $14,000 in 2013; an added flat assessment per employee; a special assessment on employers so the state can meet his debt service to the federal government. Those payroll taxes are, of course, on top of all existing payroll taxes for Social Security and Medicare.
That’s a grim prospect in an economy where many businesses are still struggling to get back on their feet. Business tax increases have a chilling effect on company growth and job creation, thereby compounding the unemployment quagmire.
Unemployment insurance “contributions” were $760 million in Wisconsin in 2010, almost as much as the corporate income tax collection of $835 million.
The UI tax totals about 3.7% of payroll in Wisconsin. States in the Great Plains average 1-2% of payroll, according to a report from the Ninth District Federal Reserve. Wisconsin was 9th highest last year.
“The near-term outlook for UI rates is not very positive for employers,” said the Fed report.
To take a micro-look at one company, Serigraph is now paying 8.6% UI tax on the first $13,000 of payroll per employee. That percentage is at the top end of a sliding scale in this state that ranges from 0.7% to 9.8%. The rate varies with employment ups and downs at companies.
The higher rate will cost Serigraph almost $500,000 this year, a much larger number than our Wisconsin corporate tax of about $200,000. In good times, we were paying around $100,000 per year.
The differential means we will have to delay the purchase of a major piece of production equipment and the associated manning.
Like other manufacturers who are still recovering from the Great Recession, our company has been part of the problem. We had to amputate half of our work force during the tsunami caused by the moral abyss on Wall Street and lack of oversight in the nation’s Capitol. Serigraph depleted its UI reserve.
The UI debt is so sizeable for many states, especially those in the Heartland, that is hard to see a solution without nasty tax hikes. There is little room for the cash-strapped states to supplement the UI contributions with general tax revenues.
The unemployment compensation crater is just one more piece of the national and state fiscal crisis. So far, the politicians, including the Republicans in charge in Madison, have largely ducked the issue.
In Wisconsin, the Walker Administration has proposed reinstating the one-week waiting period before a laid-off worker can claim UI. That would save about $50 million a year. Maximum benefits per unemployed worker, however, would not change.
In the end, the salvation always comes back to job creation, an agenda that has been over-shadowed by budget balancing, the de-frocking of public unions and a host of non-economic conservative issues.
Tom Hefty, who does endless research on the Wisconsin economy, pointed out that 19 other states did not go into debt during the recession because they had better economies and were more serious about strategic economic development.