Bats, fellow mammals, are our friends

If you should meet a bat, thank a fellow mammal. He or she ate 4500 insects yesterday, including a banquet of mosquitoes.

If you don’t see one, worry about it. Better yet, do something about it. The sad facts are that some bat species, including the Little Brown Bat, most popular species in Wisconsin, is on a path to extinction.

These columns don’t always have to be about politics, public policy or economic stuff every week. There are other major issues to address, though there is a big economic dimension to the plight of the bats.

An exotic fungus, the White-Nosed Syndrome, is threatening the extinction of the Little Brown Bat in five to ten years. Researchers put the potential economic loss if bats go away at as much as $50 billion per year.

Members of the Cedar Lake Conservation Foundation heard a plea for their survival from Janet Raddatz, who became a master naturalist after retiring from Sargento as a vice president of food safety systems and quality.

She said, “ Because so many bats have died so quickly, with no end in sight, the U.S. Fish and Wildlife Service has called the White Nosed Syndrome the ‘worst health crisis in recent history.’”

Raddatz works with many children, partly to influence their parents to dispel myths about the danger of bats. They are not blind (far from it), do not become entangled in hair and seldom transmit diseases, such as rabies, to other animals or humans.

She elaborated on the economic virtues of bats, whose insect consumption saves on crop losses and pesticide usage. Further, bats are major pollinators at a time when bees are also in decline.

She made the historical case. Bats have been in North America since the dinosaurs. 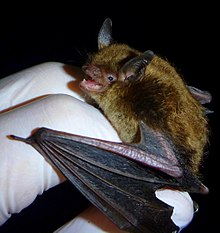 She cited their uniqueness. These small creatures are a marvel in many ways. The Little Browns have been recorded at 1360 wing beats per minute. Their sonar-like sensors operate at 20,000 hertz, eight times higher than human hearing, and it allows them to “echo-locate” their targets and destinations, much as whales and dolphins do. They are North America’s longest living mammals at up to 34 years. In other words there is much to admire.

She made the local case. One of the large collections of hibernating bats in the United States is in Dodge County – in a “hibernacula” in an old, lead mine in Dodge County. It houses an estimated 143,000 bats.

So, what can any of us do to protect these small friends? Here are a few ideas Raddatz put forth:

• Let your “snags,” dead trees, stand as homes for bats.

• Put up bate houses. The “guano” droppings can be used for fertilizer.

• Push utilities to find ways to steer bats away from the blades on wind turbines, major killers of bats.

• Support research on bat issues, especially the nasty fungus, at the University of Wisconsin – Madison and the Western Great Lakes Bird and Bat Observatory near Belgium.

• Think twice before shutting off old mines that could be hiberniculars.

• Spread the word that bats do good things wherever they are.