Can a presidential candidate be anti-conservation? 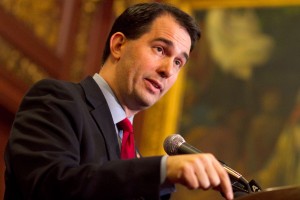 Here we go again with the Wisconsin Republican Party and its war on conservation.

With polls on conservation matters almost always showing three-quarters of the population in favor of conservation of water and sensitive lands, even when noted that taxes are required for programs, why would a party push an anti-conservation agenda?

When the traditions of the Republican Party, a conservative (note the root of the word) party, from Teddy Roosevelt and his national parks to Warren Knowles and Tommy Thompson and their stewardship programs, have served the GOP well, why do an about-face?

When most business people have taken on the obligation and challenge of running green companies, why would the Republicans bow to the few loud voices who don’t understand that the economy and environment can and should move forward in parallel?

When hunters and anglers are running short of lands for their sports in the face of private subdivisions of great forests, why would Republicans not listen to their needs?

When land trusts across Wisconsin and the nation are raising half of land acquisition costs as a match for public funds, with a majority of their dollars coming from business leaders, why would a party walk away from that funding leverage?

Why would a governor running for president want to project an anti-conservation image?

Yet Gov. Walker is taking just those actions in his proposed 2015-2017 state budget. I get the need to save some bucks in the face of a state budget that is way in the red because of unmanaged, exploding health costs. But I don’t get anti-conservation measures in the budget proposal that have little or no fiscal impact.

It isn’t just one measure either. It’s a number of attacks on time-honored programs that protect one of the state’s greatest assets, its natural resources, including:

• A moratorium on the Stewardship Program for protecting key natural areas, which takes the program to zero through 2028 from $47.5 million in bonding in 2014 and 2015.

• Stripping of the Natural Resource Board of its long-held oversight powers. There can be no governance philosophy here, because Gov. Walker’s budget proposes to move in just the opposite direction with another of the state’s great resources, the University of Wisconsin. There he proposes a new authority that would be empowered with great oversight powers.

• Cutting out 18 science positions in the Department of Natural Resources, pointing to a more political hand on resource decisions with less scientific under-pinning.

The Stewardship program dates back to 1961 when its predecessor, the Outdoor Recreation Act Program (ORAP), was created under democratic Gov. Gaylord Nelson. Republican Gov. Warren Knowles supported its renewal in 1967.

Republican Gov. Tommy Thompson recast the conservation initiative in 1989 as the Knowles-Nelson Stewardship Program. His conservation leadership and his appeal to the center of the political spectrum helped to get him elected four times.

His successor, Democrat Jim Doyle, led the re-authorship of the program through 2010.

These governors were in tune with the people of the state. They knew that Wisconsin people, Democrats, Republicans and independents, love the Wisconsin outdoors, whether for hunting, fishing, trapping, boating, biking, hiking, skiing, bird watching, and many other uses. It’s a common denominator for us Badgers– as all surveys show.

Further, the tourism, outdoor recreation, forest products and paper sectors account for more than 10% of the state’s economic makeup. Almost all of the protected lands under Stewardship are open to those uses.

Citizens/taxpayers could probably understand a cut on the program in tough budget times, as they did when the program was cut in the last budget. But these aren’t tough times any more. The economy is doing a lot better.

There are solutions or compromises available. A further partial cut might sell to citizens, but not a slash to zero funding. Instead of bonding, our leaders could find a more permanent source of continuing fund. A penny-a-pack tobacco tax was used to fund ORAP a half century ago.

So, how did Gov. Walker and his party get tin-ears on this subject? It’s hard to fathom in economic or political terms.

How does a governor run for president on an anti-conservation platform?