Journalist Dan Egan, the foremost chronicler of the challenges to the Great Lakes, just reported that two more invasive micro-species have been found in the lakes. The story is on the inside pages of the Milwaukee JournalSentinel. More than 180 had already been identified. 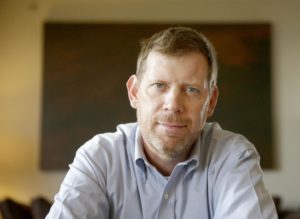 Dan Egan, Author, “The Death and Life of The Great Lakes”

He also reported in August also that another giant Asian Carp has been found beyond the electric barriers that are supposed to prevent their entry to one of the world’s greatest fisheries. Not enough alarm bells went off, though the U.S. Army Corps of Engineers is now talking about more incremental controls. Closing the Chicago Canal is the real answer.

University of Wisconsin – Milwaukee scientists have highlighted the discovery of a dead zone in the heart of Green Bay. There has been little follow-up dialogue on what to do about it. Lake Erie is in far worse shape.

The drying up of the Little Plover River and surrounding ponds has sparked a debate over the regulation of high volume wells in central Wisconsin, as has the manure disposal from CAFOs (concentrated animal feeding operations) in Northeastern Wisconsin. But that debate and corrective actions have been insufficient.

In short, environmental issues has almost disappeared from the public debate, except when large scale projects come to the fore, like the proposed, but now defunct, GeoTac iron mine in Northwestern Wisconsin or the pending Foxconn manufacturing plant in Southeastern Wisconsin.

Then, the environmentalists and the economic developers rush to the ramparts and the ideological and partisan battles begin.

It doesn’t need to be that way in a state where political and social innovation has been a historical hallmark. Under the tradition of the Wisconsin Idea, informed citizens and experts from all sides would be called to a problem-solving forum in Madison, and they would come up with a collaborative answer to the environmental challenge.

Often, there is an innovative or technological answer for which the cost is not an undue burden on the developer. As an example, as I have reported before, my company developed a bio-filter and non-emitting ultra-violet inks that together have knocked our VOC (volatile organic compounds) emissions way below state and federal standards. The state shared the capital costs of installing the bio-filter.

A state task force made a run at a compromise to solve the manure issue several years ago. It was a good start, but the CAFOs have gotten even larger and drinking water at residences in Door, Kewaunee and Calumet counties has been compromised. A new task force needs to look for better answers.

Another collaborative model that is working is the Green Seams program initiated by the Metropolitan Milwaukee Sewerage District. With support from the Department of Natural Resources and local land trusts, MMSD has been buying and reestablishing sponge areas upstream along the Milwaukee River. That program prevents flooding downstream and the need to construct another expensive deep tunnel.

There are consequences for not collaborating, for not compromising. I am guessing that the GeoTac decision to bail out on the mine in Mellen probably had a lot to do with company’s prospects of having to fight through what looked to be an unending flood of legal challenges to its operations.

Similar environmental strife could arise around the Foxconn proposition. Would it not be better for the company and the green lobbies to work out an acceptable environmental management system in advance?

Would not a collaborative model for Foxconn’s green issues avoid citations down the road?

There are pragmatic solutions out there. For instance, Egan points out that one freight train a day could carry the cargo on ships going through the St. Lawrence Seaway. The Seaway has proved to be an ineffective commercial channel, but a disastrous avenue for invasives that have greatly damaged the Great Lakes. Only two ships a day go through the Seaway.

Wisconsinites of all stripes, including the next DNR secretary, need to scream for its closure. On the plus side, its expansion has been stopped.

When Cathy Stepp announced that she was leaving her position as secretary of the Department of Natural Resources for a job in the Trump Administration, her critics made a big deal out of the falloff in citations on business during her DNR watch.

Stepp worked hard with businesses to put best practices into place that headed off violations and citations. Isn’t that what we all want?

As Gov. Walker decides whom to nominate to replace Stepp, he needs to avoid the ideologues on the right and left. They want confrontation and headlines, not solutions.
The state needs a DNR secretary who understands the Wisconsin Idea.

The state also needs a renewed dialogue during the next gubernatorial campaign in 2018 on the protection and conservation of our greatest asset, our natural resources.