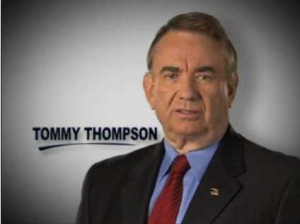 My bet is that Tommy is running.

The heaviest of political heavies in Wisconsin, Tommy Thompson delivered a rock-em, sock-em speech on behalf of recalled Sen. Alberta Darling at Timmer’s Resort outside of West Bend Tuesday night, just one week in front her critical election contest with Democratic Sandy Pasch.

The four-term Republican governor was working for his longtime political ally – “We’re not going to let it (her defeat) happen” – but he was also worked the longtime Republicans in the room one by one and then name by name in his speech.

The same day, he told a radio  interviewer that the Republicans need to regain the U.S. Senate and that he was the best bet to win the pivotal Wisconsin seat that will be vacated by Democrat Herb Kohl next year.

In pure Tommy style, he stopped to shake hands with union protesters outside Timmer’s. They were chanting” “What’s disgusting? Union busting!”

Darling told her supporters that eliminating collective bargaining was necessary to balance the state budget and eliminate the deficit left by Pasch and Gov. Doyle.  Thompson didn’t address the elimination of union powers directly, but did defend Darling’s position on asking for high union benefit contributions.

He was incensed by the recalls over policy issues, saying they “tear at the fabric of our democracy.”

He made a lawyerly argument that recalls should only be made for crimes or corruption by an officeholder, and there was none on Darling’s part. “She had the audacity to stand up and change the direction of the state. And for that she is being recalled.”

He asked the Republican crowd to get out the vote and “make sure this silliness stops.”

Thompson was tanned,  appeared to have taken off a few pounds, to have maintained his uncanny ability to remember the names of most people in the room, to connect with all of them, He showed great energy.