President Trump is beyond divisive

Whatever your political opinion of the man, I think most Americans would agree that a role model for your kids he ain’t.

That doesn’t mean that everything he does is ineffective. He has been on the right side of some decisions. But his performer persona is so dramatic that it out-weighs his scorecard of policy wins and losses.

My first take (caveat: I’m a manager, not a psychologist) when he first appeared on the serious political stage was that is massively narcissistic. Who would debate that? Remember when he nudged Melania aside to get to center stage? Is he ever out of the headlines?

My second take after watching him in action was that he is extraordinarily divisive. He lives a soap opera where conflict draws an audience. Arguably, the country is more divided under his leadership than it has been at any time since the Civil and Vietnam wars 150 and 50 years ago. You swear by him or you detest him. Family members learn to agree to not talk about him.

My latest take after observing him at center stage for more than two years is that he is even more of a piece of work. Beyond divisive, he is inflammatory. Beyond narcissistic, he needs to diminish anyone else on stage. His favorite words are still “You’re fired!” to cause maximum embarrassment. His modus operandi is insults and mockery.

The most recent example was his unnecessary attack on Dr. Christine Blasey Ford on her version of what happened decades years ago with then-teenager, now Justice Brett Kavanaugh. The Republicans had secured enough votes to confirm. He did not need to weigh in. Against staff advice, the president went out of his way to diminish her. 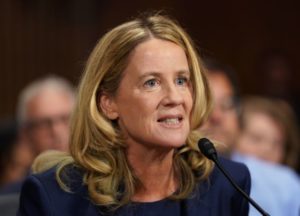 For him, it is not enough for the counter-party to not win; they have to lose. His favorite adjective about opponents is “loser.”

Contrast his MO to that of genuine leaders. The great ones make the people around them better. They run with their other people’s strengths; they don’t exploit their weaknesses. They build people up. They develop the next generation of leaders.

That even-handed approach builds relationships, even with players on the other side of the field. Dividends follow when trust develops, such as doing future deals down the road. In contrast, our president has a track record of burning bridges. In his business life, bankers, investors, contractors vowed to never to business with him again.

Down deep, our president has little respect for anyone else. (Does he respect himself?) There are real consequences for his generic disrespect.

His White House is in constant turmoil. Nikki Haley is the most recent in a long string of departures. More will go after the Nov. 6 election. All but the most partisan or patriotic volunteers take only so much guff before heading for his revolving door. None would re-up even if asked. Despite claims to the contrary, high turnover is crippling to any organization.

In the foreign policy arena, the president has taken tough stands, some necessary like the push-back on China on trade, some unnecessary like the attack on Canada, where we have a trade surplus. But, more often than not, he has added gratuitous insults at foreign leaders to his policy thrusts. How does that advance U.S interests?

Do we have any international “friends” left? He has turned longtime allies into neutral parties are best. In a tariff disagreement, did he need to comment on President Trudeau of Canada that he was “meek and mild” and “very dishonest and weak.”

His generic disrespect reaches backward as well. Take his trashing of NATO over fair share of defense expenses. No question that many European countries have been free riders to varying degrees. Previous presidents have pushed higher contributions to our common defense, and the balance has been moving in the right direction. Beyond the money issue, though, President Trump has shown a disregard for NATO.

A long line of respected U.S. leaders has endorsed, supported and even enlarged NATO over 73 years since the end of World War II. Did all those experienced leaders, many of them veterans of war, know so little about how to prevent future wars? What does our president know that they hadn’t learned? Why is his intuition superior to those who came before him?

It is not insignificant that the number of major wars and conflicts has dropped sharply since the international alliances were created with European allies, Japan and South Korea. He ignores the track record and has undermined his predecessors’ work in just two short years.

Meanwhile, he has spun the illusion that he has “friendly” relationships with Vladimir Putin and Kim Jong-un of North Korea. It’s delusion. His stance lacks reality, as his closest — but ignored — advisors have warned.

In more than 50 years of writing stuff like this, I learned that if you give respect to the person on the other side of an argument or position, you can still have working relationships.

Respect is not in President Trump’s DNA.