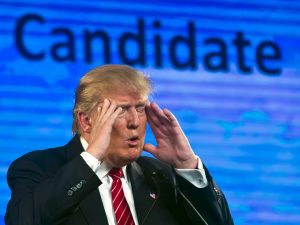 Even though Donald Trump won Indiana and thereby the GOP presidential nomination, and even though he said he could become more presidential on his way to the general elections in November, the list of reasons to oppose his narcissistic quest for the Oval Office grows by the day.

Leaders of the GOP have to be quaking about the prospects for losses down the ranks with Trump at the top of the ticket.

The list of reasons to reject Trump as presidential material, compiled from many sources, now totals 72 — major character flaws, huge contradictions in his policy statements or
just plain ignorance on issues that we should know about.

Wisconsin voters did the nation and history a favor by dampening his momentum and saying to him: “You’re Fired!” That included Democrats and independents who crossed to the GOP side of the ballot to vote for his Republican opponents.

Unfortunately, he has rebounded since Wisconsin. But his negatives are still sky high within the general electorate. Even if he is crowned by GOP delegates in July, his prospects for winning the general election in November are slim. Women, minorities, recent immigrants, almost all Democrats, offended Republicans and a majority of independents will vote for either Hillary Clinton in large numbers or not vote at all.

If Trump loses big in November, which many political gurus expect, he could also take down Republican senators, like Wisconsin’s Ron Johnson, House candidates, like the one for the open seat in Green Bay, and legislators in state houses.

The Wisconsin Taxpayers Alliance did a recent analysis of “wave” elections that showed the possible effects or Trump’s negative coat tails. In 2012, President Obama carried 43 of the state’s 99 assembly districts with 52.8% of statewide votes. He won seven districts won by Republican assembly candidates, who ran against the grain.

If Obama had picked up four more points, he would have won in 62 assembly districts, including 26 in which Republicans won the assembly seats.

In other words, a Clinton blow-out would mean many more Republican legislators would have to win against the tide at the top of the ticket.

The GOP now controls the governor’s office and both houses of the Wisconsin legislature, but a swing of four seats in the Senate or 14 in the Assembly would mean a change of control and a return to two-party government.

Here is the latest list of reasons to hope Trump stumbles on the way to the finish line (skip to the bottom if you have read some of them before):

We have more to learn about this accomplished TV performer. Please keep sending me your reasons to send him back to Trump Tower, not the Oval Office. Send them to this blog as a response or to me at jbt01@serigraph.com.