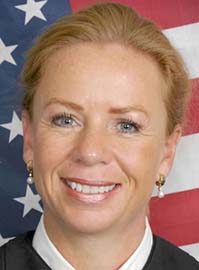 The pivotal but almost unnoticed highlight of the spring elections in Washington County was the reelection of local favorite Annette Ziegler to a second ten-year term on the Wisconsin Supreme Court.

She ran unopposed, an unusual but not unique event. Justice N. Patrick Crooks ran unopposed in 2006, and Justice Ann Walsh Bradley did the same in 2005. Ziegler’s first race ten years ago was fiercely contested, as have been most elections for the court since.

These elections are supposed to be nonpartisan, but they are anything but. Republicans and Democrats now line up respectively for the conservative candidate or the more liberal one, even though they carry no overt party label.

The lack of competition for Ziegler speaks to a number of factors:

• The deep pockets of her family, friends and political backers – intimidating to other candidates in a primary or general election.

• The shambles in the leadership ranks of the Democratic Party following the passage of the union-busting Act 10 and three bruising losses to Republican Gov. Scott Walker.

I happened upon Ziegler’s small victory celebration at Timmer’s Resort Restaurant the night of the election. It was a happy event, full of hugs from the reelected justice and buckets of “thank yous.” Retired Justices Jon Wilcox and David Prosser graced the party and revelled in the continuing conservative majority.

Her reelection carried weight because, barring untimely deaths, it secured a conservative majority on the court for at least four years going forward. The conservatives now own five of seven seats.

Conservative Michael Gableman, 50, is next up reelection in the spring of 2018, followed by liberal Shirley Abrahamson, 83, former chief justice, in 2019. Both are expected to run again. Abrahamson, a celebrated justice, will have had 43 years on the court by 2019, but probably won’t step down because she loves to be in the thick of legal battles. If she wins, she will have a shot at more than a half century on the high court.

The Republican-affiliated at majority has ensured the support of the judicial branch of government for conservative reforms coming out of the governor’s office and the GOP-controlled legislature, such as Act 10 and Wisconsin’s new Right to Work law.

As the political canard goes, elections have consequences, and Ziegler’s is no exception.

The lock by Republicans on all three branches of state government suggests that Wisconsin may no longer be a purple swing state, even though our congressional delegation is still split.
That new political landscape has been shown dramatically in the inability of the Democratic Party to find an early candidate to run against Walker in 2018. Absent an offer to work high up in the Trump Administration, Walker has given every indication that he will run for a third term next year.

He clearly prefers the executive branch to the legislative, because he also could run against Democratic U.S. Sen. Tammy Baldwin in the fall of 2018.

He has a trifecta of three wins for governor, but President Trump narrowly squeaked out a win here last November. Baldwin knocked off a four-term governor, Tommy Thompson, in 2012, so the race for governor must appear to be less of a risk for Walker.

The governor may also be worried about being tied in a U.S. Senate election to the huge uncertainties about how the Trump Administration will fare over the next two years. It’s a crapshoot by any prognostication.

Walker has some control over the agenda of state issues, but little sway over the national agenda set by an unpredictable president.

Walker’s forward agenda from the governor’s mansion is not that fresh or exciting. He has accomplished much of his vision for his first two terms, making Wisconsin more business friendly, even though job creation has lagged at half the national pace.

He has staked out lower college tuition, lower student debt and workforce development as his current agenda. His party appears to be taking a duck on health care reform that he advocated for state employees. (The legislators are on the current cushy plan.) And his party is soft on conservation. But Walker at least has an agenda.

As for the Democrats and their failure to field statewide candidates, it may have much to do with the party’s lack of a pro-growth economic platform. Voters are most worried about the economy and jobs.

With household incomes and wealth depleted by health care costs, how can the Democrats address those concerns? One answer: they have long championed small business; they could enlarge that focus to support the high growth entrepreneurs that are reinventing and enriching our economy. That is not a Republican long suit.

Meanwhile, as the unopposed reelection of Justice Ziegler shows, the state is looking more red than purple.