Sen. Ron Johnson is hardly the proverbial Mr. Smith, the naïve small-town movie character who went to Washington and stumbled into reforming it. Our Wisconsin senator ran a relatively small plastics extrusion business, but married into a major business fortune. 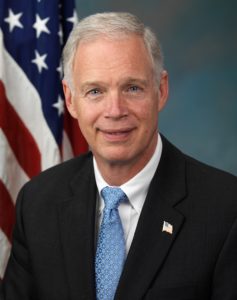 It’s the connections to Bemis Corp. of Neenah and the founding Howard Curler family that allowed him to put $10 million into his successful reelection campaign against Russ Feingold in 2016. The senator and his wife Jane Curler had a net worth of $37 million in 2014, prior to the $10 million payout. But, with growth, it’s undoubtedly higher now.

His Oshkosh-based Pacur Inc. (named after Pat Curler, its founder and a brother-in-law) was listed in 2014 with about $30 million in sales and 73 employees. Bemis Company, from which Pacur was spun out, had revenues of $4 billion in 2016.

So, he has a foot in small business and large corporations. That gave him background and motivation to fight the good fight for tax cuts for both small and large businesses in Congress as the complex Republican bill was pushed through the political sausage machine.

Before Johnson’s high-profile holdout in the U.S. Senate over the last two weeks, the Republican plan was to give large corporations a huge tax reduction from 35% to 20% and give lesser cuts to “pass-through” companies. Those include most small businesses where the taxes are paid by the owners at personal rates.

Majority leader Mitch McConnell had to have Johnson’s vote to get to 51, so our version of Mr. Smith had big leverage, and he used it to get what he demanded. The bill ended up passing by 51 to 49, with his vote and Vice President Pence weighing in with the deciding vote. It was that close.

Sen. Johnson succeeded in getting a reduction of 23% in the profits subject to tax in proprietorships, partnerships, limited liability and S corporations. Any way you cut it, that makes him a hero for small companies.

Johnson and his fellow Republicans are operating on the general premise that lower taxes bring faster economic growth. They also believe that high corporate taxes make the American economy uncompetitive.

Democrats believe in general that higher corporate taxes enable more investment in education, infrastructure and health care, which in the end promotes more prosperity. They have a hard time being pro-business.

There is little consensus among economists around either belief, except most concede that the U.S. 35% corporate rate is too high compared to other countries. The same goes for the 39.6% rate that hits some pass-through companies.

Bottom line: Republicans are making a big bet that they are right about the stimulus of lower rates. The economy has been improving for nine years, partly on the expectation of lower rates. Will passage of the GOP bill add more steam to the economic engine and keep the expansion going? No one really knows.

My bet for economic growth is always the entrepreneurs. They are the innovators who create jobs and prosperity in an dramatic way. The Dow Jones average has been riding high on the explosive growth of technology companies that were startups 20 years ago more less.

They, of course, depend on an orderly society based on law, investment in technology by government, an educated work population, a belief in advancing the common good through innovation and sensible regulations. But taxes are not their issue early on. Taxes are a down-the-road concern.

Is it too much to ask the two parties to at least agree that innovation via startups is a proven way forward? No economist disputes that thesis.

The Republicans are far less concerned than Democrats with economic equity in the American society. The personal tax breaks in the bill help all levels of taxpayers. But Democrats are saying it’s not enough and will not give the tax bill a single vote.

Unfortunately, the new law will be as partisan as the vote for Obamacare. That is not good for its long-term prospects. Bipartisan legislation (Social Security, Medicare, volunteer army) has a far higher probability of enduring.

Republicans cede the equity argument to the Democrats at their own peril. Resentment at not moving ahead moved many in the disregarded middle class to vote for Donald Trump. In gratitude, he is dismantling the GOP one tweet at a time.

Mr. Johnson can help the GOP on the equity front. The party still needs his vote for the final version of the tax bill, so he can he can insist that the tax bill include a high marginal tax rate for the fat cats that are taking far more from society than they are contributing. That would be at least 50% for any earned income (including carried interest) over $5 million.

He can insist on a minimum tax for large corporations who hire legions of, tax lawyers and accountants so they pay zero federal income tax. That is not equitable. They should pay at least 15% of pre-tax income – pre-loopholes.

Mid-size companies like Serigraph would have no problem with that floor.

Finally, Sen. Johnson, a deficit hawk through and through, must have a major case of heartburn over what the GOP tax bill does for the nation’s debt level. It jacks the deficit by $150 billion per year.

Debt reduction has been an article of faith for the GOP forever. How can Speaker Paul Ryan and Sen. Johnson sleep at night as leaders of legislation that makes then deficit worse? They will argue that the growth projections are under-estimated and the bill will be at least deficit neutral.