The main argument that Republicans used in the impeachment hearings last year was that the decision on whether President Trump should finish his term should be made by voters at the ballot box, not in Congress.

It worked to his benefit in the U.S. Senate, and he avoided removal from office.
So why is President Trump trashing our balloting system, particularly the mail-in option that millions of Americans opted for in recent primaries. Even with ground-level GOP leaders pushing the faithful to send in their mail ballots, he has repeatedly labelled the mail-in voting as rigged or corrupt. 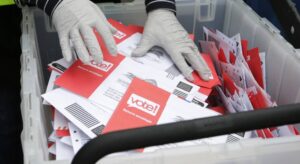 Further, his trial balloon that the Nov. 3 election be postponed comes off as cynical – a way of trying to stay in office longer.

Does anyone think those repeated Twitter attacks would be blurted out if the president were far ahead in the polls? His frantic messages to undercut our sacred voting process have increased as the polls make him look like a pending loser.

He portrays himself as an all-world winner. That means that down deep he can’t stand being seen as a loser. He must be psychically terrified that he could go down as one of the biggest presidential losers of all time.

So much so that one of the sharper political observers in the state has opined for several months that Trump could might resign if the polls worsen for him. That would put the whole election process up for grabs while he blames a fake election.

The facts are less important than rhetoric in this looming nightmare. But the facts are that there never has been major election fraud in Wisconsin or the country. The election clerks are local citizens, volunteers who take their job as a patriotic duty. You couldn’t bribe them if you tried.

Recounts in close elections unearth no more than a few hundred defective ballots.

At the ground level, far from the political operatives and spinners, how could you suborn thousands of voting clerks in burgs all across the U.S.? You would need a Russian army of fixers.

In reality, mailed ballots are probably the most secure way of casting a vote. The individual citizen has to personally sign the mailed ballot. A witness signature is required. Unlike with hackable voting machines, cyber attackers can’t guide a citizen’s or witness’ hand. And the U. S. Postal Service has generally been highly reliable; people trust it.

On top of this political theatre, there is the real danger of coronavirus in voting lines. Mail-in ballots avoid that threat. They allow nervous people to vote.

Note that voting analysts have yet to find that mailed balloting favors one party over the other.

So what is our president squawking about? And why? Does he intend if he loses to be dragged kicking and screaming from the Oval Office?

It would make for high TV ratings. As would the court suits and political wrangling preceding the constitutionally protected inauguration day Jan. 20, 2021.

In the end, if Trump challenges the election results, Republican representatives and senators are going to have to take a stiff line to defend the integrity of the American election process. Call our Congressional delegation, Sen. Ron Johnson and Reps. James Sensenbrenner and Glenn Grothmann, and elicit a pledge that they will not stand for a disorderly transfer of power.

There is one outcome could eliminate all the fuss: a massive loss in the Electoral College by Donald Trump.

One more thought: millions of voters have already opted for voting by mail. Should not that inform the president about what America wants for its voting process?