Trump trashes our democracy on way out door

Way down deep, Donald Trump lost the election last week for two main reasons; he is essentially anti-democratic and he is not a nice man.

A majority of the American electorate concluded that he has little respect for our democratic institutions, systems, norms, precedents, electoral processes, for the press, for facts and the truth, for leaders of other democratic countries, for other leaders in our country, for military leaders who he sees as not as smart as he is and even for many, many Americans who don’t see the world like he does.

They concluded he doesn’t really know or care about them. He would rather put down a big percentage of the populations than support them. 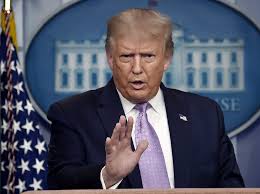 In short, Trump is a mountain of disrespect. You have to wonder if he respects anyone. He fires people for the fun of it. Witness the termination of the secretary of defense this week.

He did the nasty deed on Twitter without justification. It was an empty gesture because there is has only two months left for Trump’s people to serve. Most standup leaders terminate people face to face. He took the wimp’s way out.

Is it too cynical to think that he decapitated the Armed Forces to blunt its possible role in forcing him the leave office?

In sharp contrast, Joe Biden is a mensch. People who have been close to him say without reservation that he is a good man, a nice guy. He has ton of friends.

That difference doesn’t count with hyper-partisans who have a chip on their shoulders, who want to get even with “the man.” But decency still counts with most Americans who want compassion, empathy and goodwill in their lives.

The difference between the personalities of the two men goes way further. Trump is a poster child for arrogance. He really believes he is the smartest guy in any room. He dismisses the views of the most competent people of the country.

The opposite of arrogance is humility, the willingness to learn from other people. It’s essential for effective leaders. Biden opens his arms to honorable Americans of all stripes.

That quality of humility tipped the scales for him to become our next president. He has already invited leading health experts to help with a coronavirus strategy.

Most of us agree that democracy cannot function without respect for other Americans, even when not in agreement. Democracy is a fragile creation.

It can’t take the kinds of attacks leveled by the president on our election processes. He calls them corrupt without specific evidence. He’s like a drunk in a bar’s yelling insults and allegations in every direction. None of his charges have held up to date, and everyone knows that his threats and antics will not change the outcome.

The big take-home from the balloting last week was how well the country pulled off that massive exercise in democracy. It was an enormous accomplishment for 144 million to go to the ballot box, one way or another, to express their essential, even sacred right as a citizen. It happened mainly without incident. Amazing!

Recounts seldom yield more than a couple hundred ballot changes. And they can go either way. Recounts will not reverse the outcome, even in states with margins of only 20,000 votes.

Thousands of patriotic American citizens, poll workers from both parties, made the smooth vote happen. They should be highly insulted by what Republican Party leaders are insinuating about how they performed their duties. The GOP owes those citizens a profound apology.

Meanwhile, what should we do about Trump’s baseless trashing of our voting process. We should insist the courts at all levels act swiftly on any and all ballot complaints. They are chicken feed.

The judges cannot let a sore loser and his true believers muck up the transition to a duly elected new president. Trump, a historically big loser, is doing great damage to our democracy as he kicks and screams on the way out the door.