Do Wisconsin campaigns mean anything any more? 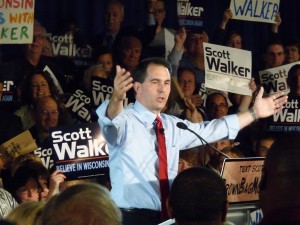 The bombshells dropped in Gov. Walker’s 2015-2017 budget give rise to the sobering thought that the recent gubernatorial campaign was akin to Kabuki Theater.

What does a campaign mean when almost none of the major policy departures contained in the budget were proposed or debated during the year-long exchange of policy ideas by Democrat Mary Burke and Republican Scott Walker?

The major issue in that hard-fought and money-drenched contest was job creation. That priority has almost disappeared from the Republican dialogue now coming out of the governor’s office and Republican-controlled capitol. As if to declare victory, the current focus is now about workforce development and filling jobs.

Lest we celebrate prematurely, there are still about a half million unemployed or underemployed adults in the state, many in the central city of Milwaukee; we still have a brain drain of more than 10,000 college graduates; and our wage levels are still in the bottom third of states.

That issue and the aftermath of Act 10 figured prominently in the Burke-Walker exchanges. Lesser issues like off-shoring of jobs by Trek, a cheap shot, a trumped-up charge of plagiarism and the influence of Koch brothers’ money also titillated the press.

The citizenry did get a picture of where the two candidates would try to take the state on jobs and public union powers. And they learned again that Gov. Walker would not raise taxes of any kind.

But where were the signals that Gov. Walker would:

• Whack the University of Wisconsin budget by $300 million and turn its governance over to an undefined “authority?”

• Zero out the Stewardship Fund that has been supported by both parties for more than 60 years?

• Strip the Natural Resources Board of its policy-making authority after eight decades in that role?

• Cut out bonding for public buildings in favor of $1.3 billion in new highway bonds, which will be paid off by taxpayers down the road?

This is government by surprise. Even legislative leaders appear to have been caught off guard.
Gov. Walker’s style of governance – throwing out broad-brush policy shifts without a lot of input beforehand – is especially relevant as he runs for president of the United States.

Nor is this a one-time demonstration of his approach to governing. In his campaign for governor in 2010, he made it eminently clear that he would balance his budgets without raising taxes. He did cut them in his first term in small slices. (It’s hard to cut taxes in a major way without robust job creation.)

But almost no one saw Act 10 coming. Without taking up its merits, all would agree it was an ambush.The legislature was left to flesh the broad-brush proposal out amidst a firestorm of controversy and protest. Act 10 helped Gov. Walker to balance his budgets, as he promised, but it was equally a political move that stripped public unions of membership and financial resources for future campaigns.

Its abrupt adoption divided the state as never before.

Clearly, we are headed for another round of the same method of leadership. The governor must figure that government by lightning bolts from the mountaintop is the only way to get traction on large, intractable issues. Once again, though, the legislature will have to figure out what do with the budget bombshells.

That branch of government has become the only base for deliberation on major policy. Past governors have used commissions and task forces to provide some deliberation before launching major policy initiatives.

Legislators will have to get input in a short time frame on just what a UW authority will look like. Will it have control over tuition? Will it be able to cut away from the state’s expensive health plan for state employees? Will the governor appoint all regents? Will it be able to add and subtract majors and campuses?

A Blue Ribbon Reorganization Commission could have sorted out some of those issues, and still could, but there’s not much time for that; the budget has to be done in a couple of months.

The university is one of the state’s greatest assets, and people here care about its future. Ditto for our natural resources.

The legislature will have to sort out the governance of that great state asset as well. Will legislators get rid of one authority (the resources board), while creating another one for the university?

Is all this presidential politics, or is there some unifying government philosophy at work? It’s hard to see a philosophy of governance, other than the elimination of citizen input.

Another example: a low-key issue during the campaign was right-to-work legislation. Gov. Walker said it would be “a distraction” in his second term. A few legislators teed up the issue in their campaigns. But it was a minor issue at best, even though many voters guessed it would become a major GOP issue if the party controlled both houses and the governor’s chair.

Even though low priority, it has become a page-one issue. Call it a head fake. It’s now high priority for the GOP, even though only 8% of the state’s private work force is unionized. Non-union high growth startup companies, which will define the state’s future economy, also don’t care.

Most business people support right-to-work legislation, but it won’t change much at their companies. The status of being a right-to-work state does have some symbolic value. It will help with recruiting of outside companies, but that tactic is of low impact on job creation here.

As for future campaigns, citizens can be forgiven if they largely write them off as a barometer of what will happen after an election. Only very general approaches to government come clear in today’s campaigns dominated by ten- and 30-second TV spots.