Five more reasons to vote No on Trump, now 105 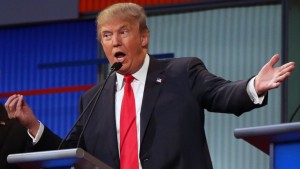 I was starting to feel sorry for Donald Trump, so I didn’t want to pile on beyond my recorded 100 solid reasons not to vote for him Nov. 8.

One hundred is a lot of reasons, but he has persisted in shooting himself in the foot. He has already shot off ten toes, one-by-one. But he keeps shooting.

Blessedly, the election will be over in a week, and he looks like a loser, despite running against a seriously flawed opponent in Hillary Clinton.

As someone who spent 20 years running newsrooms, it will be a major relief to put a cork in his attacks on the press. He has called reporters “disgusting,” “corrupt” and “dishonest,” because they weren’t “nice” to him. My experience has been just the opposite. Most journalists, though grossly underpaid, work very hard to be objective as they present readers and viewers with the facts, as best they can dig them out.

It’s a tough job to cut through all the spin, stone-walling and obfuscation. Where would we be without the reporters? We would be clueless about the reality of what’s happening in the world.

In my view, the press has been just as tough on Clinton as on him. If anything, the press corps was too easy on him early on, allowing him to insult his way to the nomination. The hundred reasons should have come out much earlier.

In contrast to Trump’s disrespect, even hostility, toward the Fourth Estate, here is a quote from our third president, Thomas Jefferson, who made many statements supporting a free press:

“The only security of all is in a free press. The force of public opinion cannot be restricted when permitted freely to be expressed. The agitation it produces must be submitted to. It is necessary to keep the waters pure“

Trump likes murky waters. He has threatened, if elected, to rewrite libel laws so political figures like him can sue the media.

Not feeling sorry for him and tired of his bullying and his guff toward the press, here are five more serious reasons beyond the 100 listed on my blog heretofore:

101. In some ways, he’s just plain dumb. How many public figures would utter crude sexist comments to a live TV interviewer, whether the microphone was on or off? Dumb, really dumb.

102. He says the election process has been rigged against him. Was it rigged against him when he won the primaries and the GOP nomination? Clearly, it’s “rigged” only when he looks to be losing. Nobody from the outside is rigging his self-inflicted wounds. Election officials in municipalities across the country have rejected his broad-brush claims that the election procedures are not under control. He has offered no serious evidence to the contrary. It’s just another slap shot.

103. He clearly believes paying taxes is for other people. Ok, his write-offs may be legal, but is paying no federal tax for 18 years ethical? He is a real live case for an inescapable alternative minimum tax at the personal and corporate levels. Business loss write-offs, like his $918 million write-off in 1995 should be disallowed at some point. A 20-year loss carry-forward is too much. In his obdurate refusal to release his tax returns, you have to suspect tax fraud.

104. He used the Donald Trump Foundation, a non-profit organization, to make illegal political payouts. One went to the campaign of the attorney general of Florida, who at the time was investigating Trump University. No charges were filed. He later reimbursed the Foundation, paid a fine and cited sloppy practices.

105. He is coming off as a poor loser even before he loses. In the third presidential debate, he refused to agree to accept the results of the election. He said he would keep the nation in suspense on the answer to that question.

I would like to think that no more reasons to vote against him – or Clinton – will surface before Tuesday’s election. But I wouldn’t bet on it.

In any case, I won’t be voting for either one of them.