That vaccination center, along with four others on UW campuses across the state, showed important leadership by the UWS on one of the most pressing challenges in the history of the state. In itself, it is a significant deal. We can’t get enough leadership and help on vaccination. 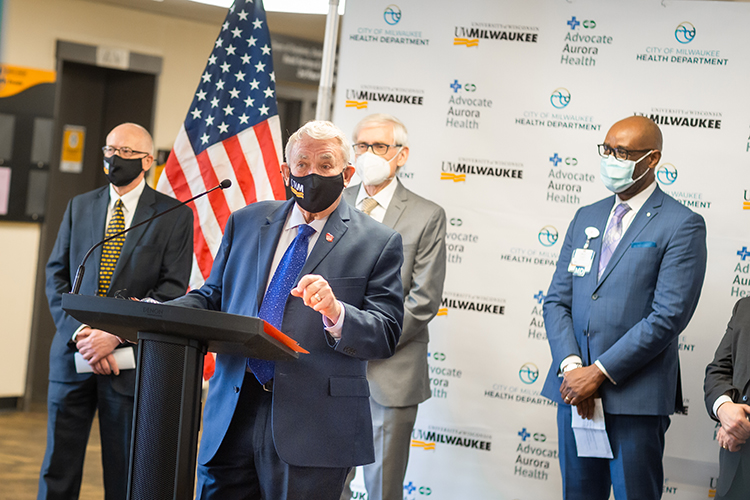 Thompson previously led the way for COVID testing at UW campuses and for turning loose senior nursing students to serve as emergency troops for putting needles in arms.

But the two leaders were making an even larger point. That is that the university should be directly involved in every pressing economic, social, environmental, and health issues in the state. The original “Wisconsin Idea” to serve the whole state has faded over time in favor of a Madison-centric system. It needs to be re-embraced if the system is to enjoy the support of the citizenry in all 72 counties.

UWM has shown an increasing awareness that its main mission of education is not its only responsibility. It has launched several major initiatives that deal directly, not indirectly, with the biggest issues in the M7 region.

Chancellor Mark Mone has led the creation of M3 that involves UWM, the Milwaukee Area Technical College and the Milwaukee Public School System in a triumvirate to sharply improve the graduation rates at MPS. Its first two years have shown a remarkable success in producing more graduates.

UWM has also advanced the concept of combining the freshwater resources of the system into a fresh water collaboration. That collection of human resources will work to maintain the Great Lakes as one of the world’s greatest natural assets. They are threatened on many fronts, including the terrible invasion of literally trillions of quagga mussels that are consuming a huge share of the nutrients that support thousands of native species.

Without the brain power of collaborations like UWM is proposing, we don’t have a chance of solving issues like the quagga destruction. UWM should step up to own the quagga issue.

Recall that science and technology mitigated the damage being done by the lamprey eel that began in the 1920s.

Think about the power of collaboration over the last year in developing the COVID vaccination. It has been a remarkable human achievement. Some call it miraculous.

There are other regional challenges that require the full involvement of the UWS across the state and UWM across the southeastern Wisconsin region. Racial justice is one that is front and center for this decade.

It is a terribly complex set of dynamic issues, but certainly raising education levels is one of the best levers for more stability, equity and less disruption. M3 is one essential campaign. The Moon Shot and Promise projects to improve baccalaureate success is another.

UWM’s student body is 32% of color; so UWM is simply one of the best ladders out of the poverty trap for young people in the region. There are many other players doing their part, like MATC and the region’s private colleges, but UWM is the biggest institution in the war on poverty.

As one former executive at NML reportedly said, “If we didn’t have UWM, we would have to invent it.” Of NML’s 6,000 employees in the region, 2400 are UWM grads.

In another arena that screams for leadership, public health in Milwaukee is a disgrace. UW – Madison promised in 2005 to lead public health efforts in Milwaukee. One of its initiatives was infant mortality. Its efforts went nowhere. Other efforts are invisible.

UWM has a new school of public health, but it is under-funded and under-led.  The three colleges and schools at UWM need to be pulled together as a powerful force for better public health in the region.

Long and short, more attention and resources need to be devoted to make UWM a world class urban university.

The press conference by the two governors put a shining light on the kinds of efforts that University of Wisconsin can bring to bear with forceful and collaborative leadership.