Torinus is a public speaker on business topics such as health care cost management; venture investing and management; board dynamics; economic development through public private partnerships. 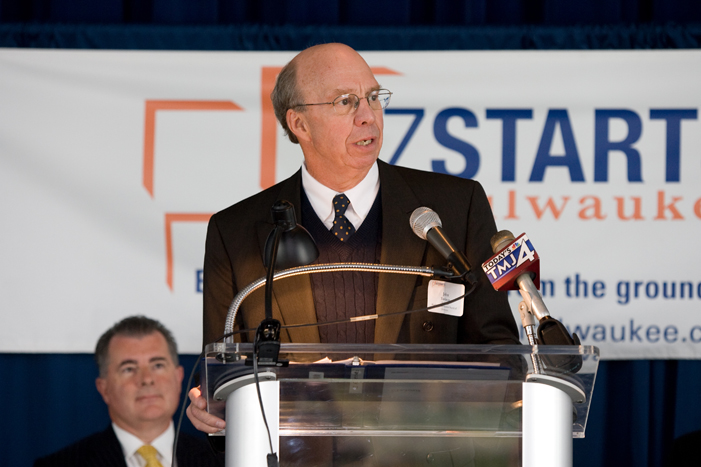 Torinus walks through how his company has tackled the hyper-inflation that plagues the nation’s delivery of health care. The medical side of medicine can be brilliant in the United States, but the economic side is busted.  Torinus pulled innovations from the boldest reformers in the country and put them to work at his company. It became an incubator for testing new approaches. Consumer-driven principles worked. One-site primary care worked. Medical tourism to India did not. The collection of the concepts that worked became, in essence, a new business model for the delivery of health care. Budgets are busted at all levels of government because of run-away health costs. Corporate bottom lines are eroded. And health costs are the number one reason for rising personal bankruptcies. Torinus boils down his company’s new business model into three platforms: consumer-driven plans; the primacy of primary care; and finding centers of value in the emerging health care marketplace.  Payers of all stripes will leave with a blueprint for controlling costs while improving health.

Every state in the country’s great Heartland has tried heroically for decades to offset the loss of manufacturing jobs, the bedrock of its economy. Torinus, whose company has had manufacturing operations in Wisconsin, Mexico, China and India, has moved the operations back to the U.S., but not because of tariffs. He discounts what he calls “old ED” – old economic development, such as recruiting from other states, as the way back to prosperity. Instead, his speech on “New ED” centers on reinventing the Midwestern economy from the ground up. An angel investor and entrepreneur, he promotes taking advantage of the region’s aptitude and resources for full engagement of the burgeoning innovation economy. In his view, launching high-growth companies in a systematic way is the main route back to economic high ground. A founder of BizStarts Milwaukee, he talks about his first-hand experience in creating an entrepreneurial ecosystem.

Large American multi-national corporations are making an increasing share of their revenues and profits from their operations in foreign countries. They have the resources to make big moves in overseas markets. How do smaller firms get a piece of the global business action?  John Torinus got Serigraph Inc. a mid-sized manufacturing company, started down the global road 20 years ago, and he learned a lot of hard-earned lessons along the way. The company still exports. But its 450 employees are now in two main plants in Wisconsin.  “We made plenty of mistakes, but we got some things right, too.” Torinus, who holds a master’s degree in International Relations from the University of Stockholm, would like to help other companies successfully navigate the waters of global commerce. His talk about lessons learned in his expansion and later retreat to the U.S.

Few boards add value to the corporations they serve, and many, because of their passivity, end up aiding the process of value destruction.  So thinks John Torinus, chairman of Serigraph Inc. “I tell people who recruit me as a board member, ‘Don’t put me on your board if you don’t want a highly active director.’” Torinus means it and refuses to be part of rubber-stamp boards. The board he chairs for his own company is extraordinarily engaged in its strategic directions and governance. “I look for the sharpest, most out-spoken people I can entice to serve,” he said in a speech. He contends his outside board, with a majority of outside directors, has added immensely to long-term value. Torinus has served on more than 20 for-profit and non-profit boards, served as chairman of a half-dozen. He gives an annual lecture on private company boardmanship for the executive MBAS students at the University of Wisconsin – Milwaukee.  As an investor, he makes it a requirement for committing dollars that the startup company has an independent board.  In his view, startups and mature companies alike need the discipline of answering to a board of engaged directors. Torinus offers proven ideas for getting the most from a board.

Do Green and Gold

Wisconsin Senator Gaylord Nelson, the father of Earth Day, said, “The Economy is a wholly owned subsidiary of the environment.” He was right, of course.  But John Torinus contends that it works the other way around, as well. In his speech called “Green and Gold,” he makes the case that the economy can’t move forward without good stewardship of the nation’s natural resources, but adds that the environment suffers if the economy isn’t moving forward in parallel. His balanced view stems from his 20 years as a CEO of a mid-sized manufacturing company and his civic leadership of environmental groups. His latest service to environmental causes is to serve as chairman of the Wisconsin Chapter of The Nature Conservancy. He is also vice president of his local land trust and headed the Southeastern Wisconsin Clean Air Partnership.  His company’s environmental management system has achieved IDSO 14000 status.  “We stopped short of my wife’s suggestion that we put on a green roof with goats,” he said. “I should have listened to her about the sod roof.” Torinus advocates innovative, technological, collaborative approaches to attaining higher environmental standards. “The old command-and-control have taken us only so far,” he said. “We can do much better.” The Green and Gold title is a play on his roots in Green Bay. “The Packers collaborated beautifully to win the Super Bowl, and we should follow their lead in dealing with the interactions between the economy and the environment.”