Straight Talk from the Heartland: An Entrepreneur’s Memoir 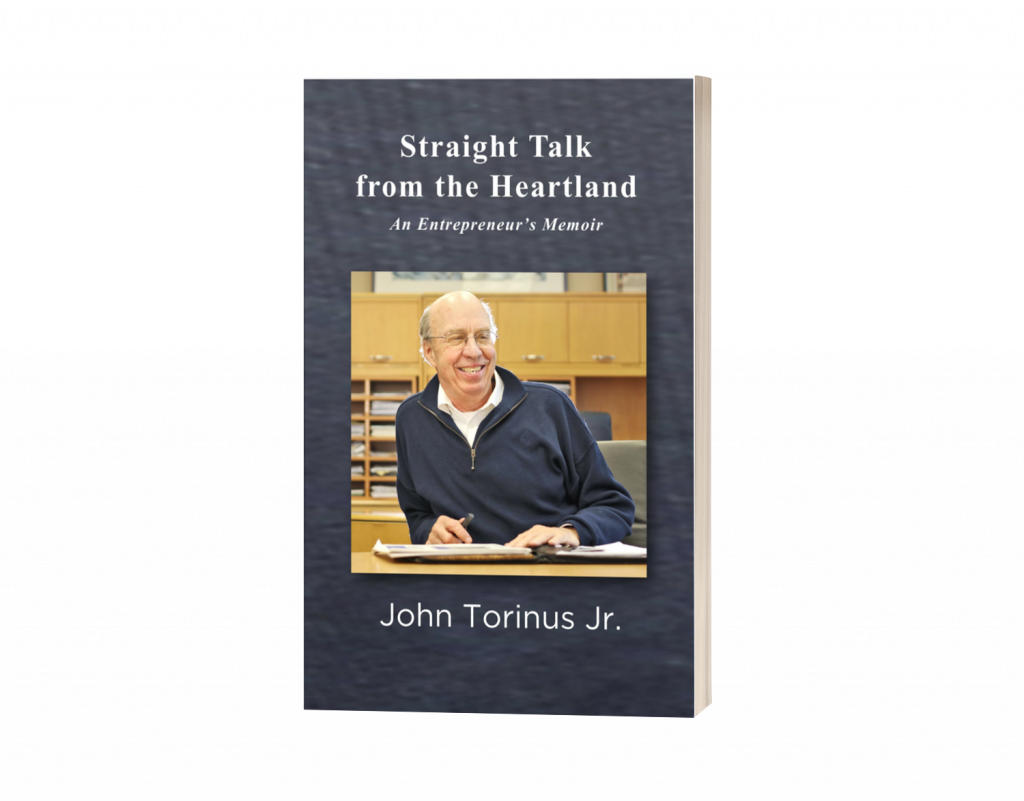 While churning through the chapters of his memoir, it became clear that John Torinus was often in the role of change agent. Frequently, that meant starting a new business or fixing a broken organization in either the for-profit or non-profit worlds. He loves assembling a team of what he calls “wizards’ in different disciplines, shaping a strategy, and then turning them loose to achieve success.

Of course, there were losses amidst the wins along John’s entrepreneurial journey. Nevertheless, it was a fun ride. He considered entitling the book, “Everything I learned about business, I learned by screwing up.” Other business people said they could write a similar book. Straight Talk from the Heartland provides a compelling overview of a life well lived.

Straight Talk from the Heartland: An Entrepreneur’s Memoir is an account of fixing broken organizations, failing businesses, and teams that just don’t work. It’s a story that deserves a place not just in memoir collections, but in business libraries interested in candid inspections of what makes a business work and what leads to its failure.
The first part of John Torinus Jr.’s memoir surveys his childhood, early influences, and coming of age in the 1940s and 50s.

From family interactions to early career moves, Torinus paints a picture of a budding entrepreneur who dabbles in different ventures early on, learning important life lessons from each.

His 50-plus years as a reporter provides candid information on how his writing lead to wider-ranging inspections of leadership and entrepreneurial approaches to life, business, and relationships.

Choosing to engage with his subjects rather than reporting from an outsider’s viewpoint led Torinus to different endeavors and new realizations about business organization and relationships. These are candidly assessed in the course of his autobiographical journey: “Ben, who had the title of president, turned out to be a good engineer, but a blockhead when it came to business. He and Jim started fighting, mainly over Ben’s insistence on long runs. We were building to stock the warehouse with finished goods instead of building for order and quick cash return. We had eight million blades in inventory. As a result, the company was going down. I had to step in as general manager. My first decision was to separate the two men, telling them not to talk to each other, to communicate only through me.”

Straight Talk from the Heartland accents the story with vintage photos and illustrations that bring family members and various people to life. Torinus is not shy about exploring the impact of his decisions on others, as well as himself: “After 50 years of being grossly undercompensated as a journalist and author, I finally figured out where the gold was hidden…I like to think I threw some gasoline and matches on the prairie fire of grassroots health-care reform.”

Readers who want to make the leap from an outsider position to a more engaged business approach will find Torinus surveys experiences that connect the dots to making many important transitions into not just more effective business relationships, but more financially rewarding sources of revenue.

From start-up infrastructure to assuming the position of “lone business voice on the board of the staff-driven organization,” Torinus analyzes the influences, actions, and perceptions that changed not just his life, but the businesses he worked with.

The result will appeal to two audiences: those interested in the memoirs of journalists-turned-entrepreneurs, and readers who want to make their own leaps into businesses, but need examples of successful routes in order to become thriving survivors in the entrepreneurial world.