Watch Michels distance himself from Trump

Keep your eyes and ears peeled to watch as Tim Michels, the winner of the GOP primary for governor in Wisconsin, distances himself from one-term former president Donald Trump in the general election against incumbent Gov. Tony Evers. 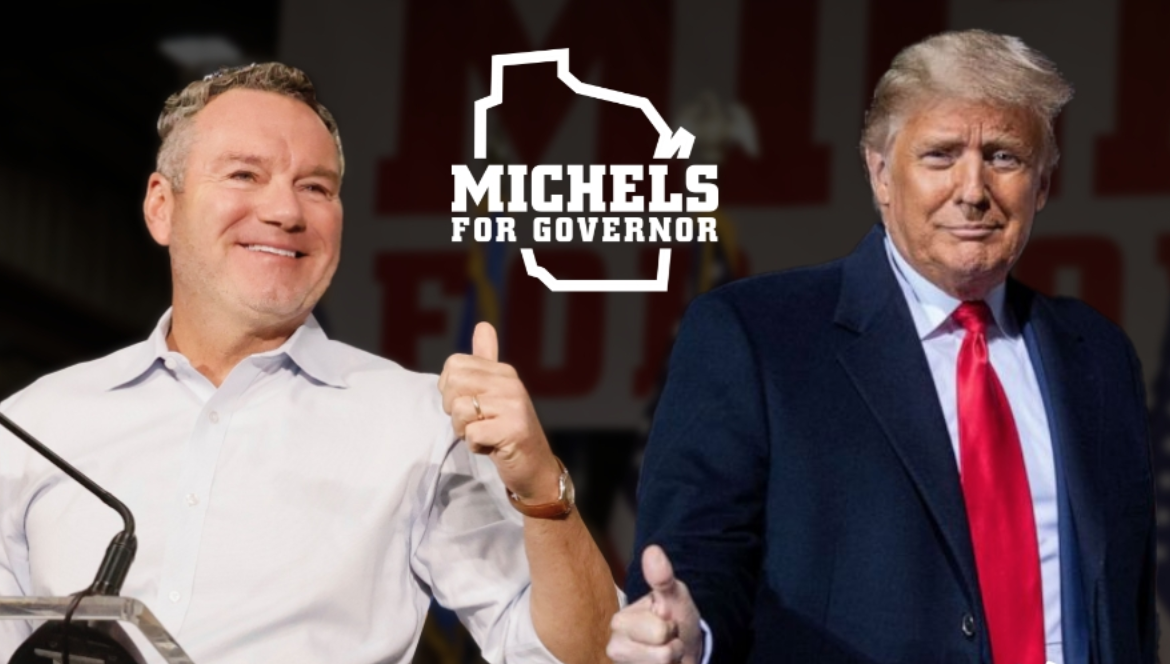 Michels won Donald Trump’s endorsement and in return promised to back Trump for president in 2024.

The verdict is in on Michels’ decision to superglue himself to Trump: Trump clearly helped Michels defeat Rebecca Kleefisch, who bleeds Republican credentials, by about five points in the GOP primary.

But now Michels has to appeal not only to Republicans, but also to independents and to Republicans turned off by Trump. It’s going to take some fancy footwork to gain a majority in the Nov. 8 general election.

A recent Marquette Law School poll found that only 34% of the voters in Wisconsin want Trump to run again. He is not a generally popular figure here.

Trump’s signature issue since losing to President Biden in 2020 has been to get himself back into the Oval Office through decertification of his losing results. He’s been beating the “stolen election” dead horse for more than a year and a half. Will Michels continue to beat that dead horse, too? Doubtful. He’ll go mum and want to talk about “more important” issues to the state, like jobs and the economy.

Will he follow the Glenn Youngkin model who won the governorship in Virginia? Youngkin paid homage to Trump’s power in the GOP, but kept the former president at arm’s length in his winning 2021 campaign.

Michels has his own credentials as a former Army ranger officer and a very successful entrepreneur. He doesn’t need Trump to raise money; he has more than enough of his own.

Michels owns a mansion in Connecticut and educated his children there so he has a taint of carpetbagger, even though he spent his younger years in Wisconsin.

The last thing he needs is a big shot with a big mansion with a high flier life-style like The Donald to troop through Wisconsin and tell Wisconsinites what to think, how to live their lives and how to vote.

One poll showed that as many as half of the Republicans in the country would prefer to vote for somebody else in the GOP 2024 presidential election.

Meanwhile, Trump is facing intense scrutiny from an array of prosecutors, from the Department of Justice and from Congressional investigators. Their charges and allegations will be in the headlines all three months before the November election. Trump is expert at dodging impeachments and legal complaints, but the large body of withering criticisms and attacks will continue to mount.

Even if he fends them off, his volume of political baggage will continue to grow. And chances are that at least one of the prosecutions will stick.

Does Michels really want to be connected with the Trumpian melodrama? I say he will make a pragmatic decision to give Trump token attention, but never get very close.

One small blessing from the primary was the elimination of Rep. Tim Ramthun as a serious politician. He rode Trump’s coattails, but got only 6% of the Republican vote. Republicans finally demonstrated that they know he is a fake. True to form, Ramthun wants a “full forensic cyber audit” of his loss. What the hell is that? Say goodbye, Tim.

Gov. Tony Evers will surely run an ad that shows side-by-side Trump’s mansion Mar-a-Lago in Florida to Michels’ mansion in Connecticut. He will make the “birds of a feather” analogy.

Evers has to be licking his chops at how closely Michels tied himself to one of the biggest losers in American history: who bankrupted multiple businesses, won only one election, and is the furthest example of a person you would want your kids to emulate.