It is not often in life that Americans are presented with a black and white choice between good and unmitigated evil, between war and peace.

Such is the weight of the strategic decision to stand with heroic Ukrainians and their fight for human decency and democracy against the incredible malevolence levied by Vladimir Putin and Russia against an innocent, non-threatening country and its civilians.

Like most other civilized people, I have thought and prayed that the horrors of World War II were put to rest. My father and my uncle, like many of your relatives, fought in that bloodbath. More than 400,000 American soldiers, flyers, sailors and marines died, along with more than 20 million allied Russian soldiers and civilians. 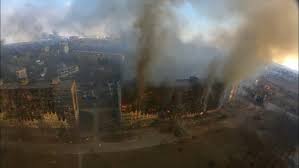 Dictators, like Putin, never learn from history. They get history wrong and conjure up glory and destiny from short-lived military victories and dominance. That misread of the world of today qualifies as a form of insanity. Putin’s relentless cruelty matches that of Hitler and Stalin.

The valor and principle of Ukraine’s military men and women in defense of their homeland stands in complete contrast. This is a pure case of good versus evil. There is no room for equivocation.

Blessedly, a majority of the American Congress saw this piece of modern day history in the same light. The two houses voted in bipartisan agreement to send another $40 billion in humanitarian aid and armaments to Ukraine. The vote was not unanimous. What are the opponents thinking? All Democrats were pro-Ukraine. Eleven Republicans in the Senate and 57 in the House voted against the Ukrainians.

GOP naysayers will have a variety of timid rationales for not being on the right side of this historical clash between good and evil. In the end, pivotal decisions become binary: yes or no.

All factors included, a minority of Republicans refused to stand tall with the Ukrainians. They matched the equivocation of former president Donald Trump, who is caught up in a sick relationship with Putin whom he admires.

In the Wisconsin delegation, only one misguided Republican voted no. Rep. Tom Tiffany, a Republican from Hazlehurst in the state’s northernmost district, would never get elected in any other part of the state because he is out of step with most Wisconsin citizens.

The war in Ukraine has reached a stalemate. That constitutes a win for the Ukrainian government against much bigger Russian forces. This war is not over. The Russians are pounding at numerous targets across the country, especially in eastern Ukraine, which Putin would like to gain as a consolation prize after failing to subjugate the whole country.

More damage must be inflicted by counter-attacks on the Russian forces until Putin loses his bargaining power and his appetite for encroachments on other surrounding countries. For example, Ukraine needs anti-ship missiles from the West to knock out Russian ships blockading its southern ports. They are fair game.

Putin’s miscalculations on the probability of success in Ukraine will go down in history as one of the biggest military blunders. If his defeat is severe, he will inevitably lose face and standing in his home country. He can only keep the truth from the Russian people for so long.

The latest Western estimates of Russian military fatalities is now more than 20,000. That’s a lot of body bags going home. The Ukrainians are sending photos of the dead soldiers to their mothers.

Meanwhile, Western Europe is more unified than ever before about sending the message that 20th century warfare must be a thing of the past. Long-time neutral countries Sweden and Finland are about to join the NATO alliance, an unforeseen result that will undercut Putin’s stature as the smart leader of a reconstituted empire.

The additional $40 billion in US support is table-stakes poker at a level that Russia will be hard pressed to match.

General Colin Powell, former head of American forces, believed in using overwhelming force when at war. The $40 billion package, matched by $20 billion from other NATO countries, could tip the scale toward a significant, if not total defeat, of the Russians.

If that support is not enough, America and NATO need to step up to do whatever it takes to win. Dictators like Putin do not believe in diplomatic compromises. Further, they do not honor deals. They only understand defeat. Only the Russian people and other leaders can take down Putin. And they will take him down if he’s viewed as a loser.

At great personal risk, some prominent Russian voices are starting to be heard in opposition to the misbegotten, evil war.