Get ready for blizzard of political bull

People in Wisconsin take winter blizzards in stride; seldom do they miss a day of work, even if on occasion it means hopping a snowmobile to get there.

But they are about to face a blizzard of political bafflegab prior to the April presidential primary election that may overwhelm them.

Trump invented the term “fake news” to undermine the free press, even the more objective news sources. He, and some of his potential opponents in the Democratic party, without labelling it, have subsequently invented what could be called fake facts, fake information, fake interpretation of events that recently happened.

Let’s start with the Trump’s spin on the Mueller report.

Robert Mueller, as straight a shooter as this nation can produce, did not exonerate Trump from the Russian web-based interference in the 2016 U.S. elections. He simply did not find any provable links between the Trump campaign and the Russian disinformation campaign against Hillary Rodham Clinton. Fair enough. Trump is clean on that count.

But Mueller did say loud and clear was that his exhaustive analysis uncovered Russian meddling in the election that helped the Trump campaign. The president is spinning that never happened.

Who should a Badger believe?

I go with the objective analysis.

As for the historic impeachment trial, Trump has declared victory.

That is a fake interpretation. He was “acquitted,” not in the criminal legal sense, but of transgressions that the U. S. Senate concluded did not rise to the level of an impeachable offense.

That doesn’t make the president right, or innocent, or victorious.

His use of the presidency to muscle the Ukrainian president to do political opposition research on the Bidens was clearly out of bounds. It may or may not have been impeachable, but clearly was a bozo move that hurt an American ally, accommodated Russian interests and compromised American foreign policy.

The president drew a get-out-of-jail card in the GOP controlled U.S. Senate, but doesn’t absolve him of horribly bad judgment.

Disclosure: I opposed Trump in numerous columns in 2016.)

On the other side of the aisle, the political braggadocio is equally galling.
Senator Bernie Sanders proposes to nationalize the health care industry as part of his socialist vision. He professes, based on his experience as mayor of Burlington, VT, that the country can afford Medicare-for-All at a fuzzy federal cost of about $3 to 4 trillion over ten years. 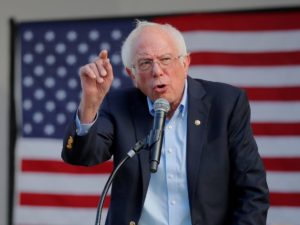 This country has about 30 million uninsured. At $11,000 per person annually, the national average health cost, that’s $300 billion per year. Over a decade, that’s $4 trillion.Now add the cost for filling in coverage for the under-insureds and the inefficiencies of government management of 20% of the U.S. economy.

Clearly, Sanders’ numbers on the stump are chump change compared to what the real costs will be. The workers at Serigraph would lose the company’s cost-effective health plan at $7000 per person and be forced onto a government plan.

In short, Sanders is a minister of chaos. He would disrupt of a health system that is far from perfect, but generally works for most American people. It needs better management to get to affordable universal coverage, not an entire
trashing entirely.
The good senator can’t count to 20 with his shoes on, and he should be held accountable for his profligacy as he campaigns in Wisconsin. He can’t be allowed to get away with fake accounting.

Then there’s the baloney surrounding the rise in the economy and the stock market. The expansion under Trump was only slightly better than the average 2% rise in GDP during President Obama’s eight years.

The stock market rise has been Trump’s triumph, but any one of the 14 GOP candidates in 2016 would also have pushed through a tax cut. The GOP had control of both houses of Congress in 2017.

In reality, the tax cut probably had far less impact on the economy than Trump’s overall promotion of business interests and his rampant deficit spending, a huge economic stimulus.

Debt has soared under Trump, as it did in his business enterprises (six failed), and the economy responded to the sugar-high. It even offset the negative impacts of Trump’s sledge hammer tariff strategies.

In short, the stock rebound had many contributing factors. Not the least of them is the hard enduring work of American workers and business managers, those who do the real work of creating prosperity.

The politicians are essentially bystanders who peddle all manner of fake rationales for their stewardships.

Be ready for their blizzards of bull as they traverse Wisconsin next month. Demand some straight talk.