The search committee for a new University of Wisconsin System (UWS) president has surfaced two candidates who look to have the chops necessary for leading the university through some turbulent times in the next five to ten years. 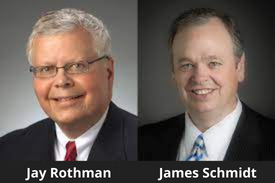 Jay Rothman, who is stepping down from the leadership of the largest law firm in Wisconsin, and James Schmidt, the chancellor of UW-Eau Claire, have track records that lend themselves to reinvigorating the Wisconsin Idea in the 26-campus statewide institutions.

There has not been a high level strategic analysis of the sprawling UW System since 1971, when UW was merged with the Wisconsin state college system. Most large organizations do a strategic update every three to five years. We are long overdue for a new leader who will launch a strategic overhaul.

Rothman’s expertise has been strategy, mergers and acquisitions for large corporations. His firm, Foley and Lardner, has 500 attorneys who work in a collegial manner, much like a university of talented professors and administrators operate.

Schmidt has been a change agent at UW-Eau Claire where enrollment has grown over his eight-year tenure – in contrast to a general decline across most of the campuses in the system.

He has orchestrated collaborations with big players in the private sector and the establishment of the Confluence, an arts and cultural venue at the convergence of the Eau Claire and Chippewa Rivers. Those two sets of skills will both be needed as the new president faces these challenges:

So, which of the two candidates would be better able to address the array of challenges that must be resolved for UW-Wisconsin to stay in the upper ranks of universities around the world?

Both candidates should have a more statewide vison than previous presidents who generally put Madison first and the rest of the system in a distant secondary position.

Neither needs to be Superman. A blue ribbon strategic commission could provide insight and support for either man to be a needed change agent.

This entry was posted in University of Wisconsin System. Bookmark the permalink.