Respect school board leadership on April 5; keep dissidents off the board

Here we go again. Remember back in the last decade when the West Bend School District was almost brought to its knees when a band of religiously driven zealots pounded away at the management and school board for not meeting their righteous views on how the district should be run.

A small group of highly vocal evangelical and political conservatives, which included Mary Wiegand and Jodie Geenan, eroded trust in the governance of the district with unending questions, sharp criticisms and unfounded allegations. They purported to be speaking exclusively for parents’ rights when, of course, every other leader of the district were elected, or appointed, to speak for those same rights.

What made their views holier than those of other responsible adults in leadership positions in the district?

The result of their disrespectful dissent was a district with a tainted reputation. The district had a hard time recruiting teachers and lost eight of nine administrators who moved on. The unhappy situation had to be fixed.

Fortunately, the voters in the district believed in electing pragmatic adults who wanted to run the district in a common sense, problem solving respectful manner. None of the disrespectful minority are on the board today. 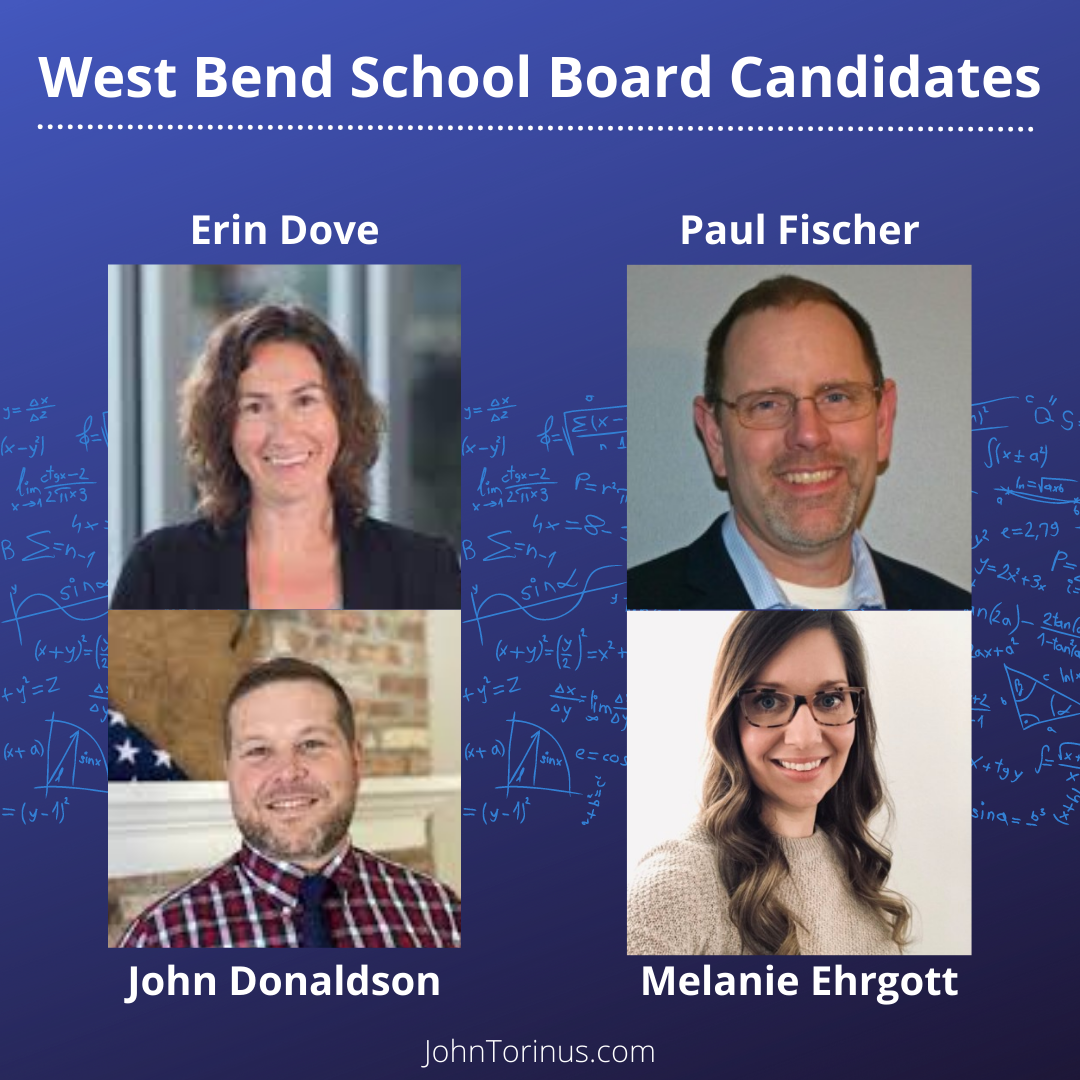 Two challengers for board seats, John Donaldson and Melanie Ehrgott, can be viewed as an extension of that small band of dissidents within the district.

Voters had a chance to view the differences between two incumbents on the board, Erin Dove and Paul Fischer, and the challengers at a forum Wednesday night sponsored by the West Bend Area Chamber of Commerce.

Fewer than 20 people attended the forum at City Hall, and there were no fireworks between the four candidates.

There was agreement on a broad range of concepts about how to run a school district, but beneath the surface there was a clear difference of viewpoints on how the schools are doing and how they should be run.

Dove and Fischer were decidedly more positive about the performance and prospects of the District and its service to nearly 6000 students. The two challengers, Melanie Ehrgott and John Donaldson, did not present specific evidence of mismanagement of the school district, but used words that revealed them as very critical of the district.

First off, all four agreed on these overriding concepts:

Depending on your point of view, the unending objections of the dissident group to school management on various issues can be viewed as harassment and disruptive to rational and common sense management of the district.

The two challengers made comments, without concrete evidence, that showed antagonism to the way the district is being run. For example, Donaldson cited bullying that goes unanswered, drug use in the schools that has not been addressed, and sexually inappropriate content in school materials. All of these issues have been addressed by the current board, but not to his satisfaction.

Donaldson said the board and management have not responded to his emails.

Both Ehrgott and Donaldson called for return to the basics of reading, writing and arithmetic. They object to content in the cloudy and controversial concept of Critical Race Theory and social and emotional learning and assistance. That’s the job of parents, they say, even when kids come to school ill equipped from their home experiences. Their position is consistent with that of right wing voices across the country who are taking their causes to the local level.

In their statements, Fischer and Dove pointed to a range of improved communications from the district to parents, including regular emails on important subjects, a more comprehensive website, an opportunity before board meetings for citizens to make comments without rebuttal and the superintendent’s occasional column in the local newspaper.

Ehrgott asked the board to clean up biased content and the day-after-day “toxic environment” in the schools.

Both Fischer and Dove said they are not political when it comes to board decisions. Dove said a board member must think through issues, digest the pros and cons, do research and be a good listener. Fischer cited his 20 years of management experience.

Dove called for West Bend to be a “destination school district.”

All four candidates agreed that the end game for the district is to produce students who are prepared for the world after high school, whether it be the world of work, entry to the military, or higher education in either a technical college or a liberal arts university.