Sorting Out Hissy Fit on ObamaCare for Congress 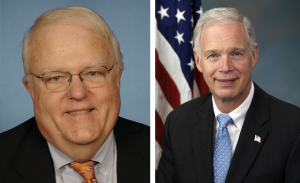 The ObamaCare pot continues to boil, and now the hot water has spilled over to the Republican right wing.

Wisconsin Rep. James Sensenbrenner, who has held one of the safest GOP seats in America for most of four decades, has raised a stink about what he regards to be a political stunt by Sen. Ron Johnson, a Wisconsin senator loved by the Tea Party. Their issue is whether the political class in Congress has to follow ACA, the 2010 health care law, like the rest of America.

Johnson is taking the purist view that the letter of law is the law and Congressmen and their staffs should get no exemptions. He is filing a suit to make them go to the new exchanges to buy coverage. Sensenbrenner is taking the pragmatic view that they should get the same kind of breaks that Americans get if they work for an employer in the private sector.

Therefore, Sensenbrenner is OK with yet another Obama exemption to the law, this one to allow a taxpayer contribution of 25% to 28% to the plans bought by Congressmen and staffers on the exchanges. He sees a brain drain from Congress if staffers are forced to pay more for health care.

Sensenbrenner is coming off as tone deaf in comparison to Johnson. He is losing the political debate big time. But Sensenbrenner isn’t all wrong. Some observations:

• Surveys show that employees in middle and large companies in the private sector pay on average about 30% of the cost of health care, and employers pick up the other 70%. Congress is a large employer – too large at 11,000 employees – so the Sensenbrenner argument can be made that a 70-30 split for Congress follows what much of America lives with.

• Individual insurance policies generally cost more than group plans. And ACA raises costs. So, staffers will probably see higher premiums than they pay now under the Federal Employee Health Benefit Plan. And more than they would pay if they were employed by a private company with a group plan. There could be the brain drain to the private sector. Raises will have to be given to retain key staffers.

• For similar fears of brain drain, most mid and large private companies will continue to offer health care benefits.

• Congressional staffers are paid well, so most will not qualify for major subsidies under ObamaCare.

• The Sensenbrenner-Johnson dust-up should be used to bring out important facts. Well-managed companies in the private sector deliver full health benefits for $8,000 to $10,000 per employee. What is the cost in the federal plan? I bet it‘s double. The facts, please.

• The Obama Administration has passed out a stream of exemptions to allies, like unions, aggrieved by the new law. The latest deviation from ACA goes to five million Americans who saw their policies cancelled. They can qualify for a “hardship exemption” and may be immune from the mandates and fines. “The administration has effectively rendered both ‘hardship’ and ‘mandate’ meaningless,” said Sally Pipes of the Pacific Research Institute. The Congressional exemption is just one more in a long line.

What to make of the rift in the Wisconsin GOP ranks?

The first is to repeat the obvious, that the new law is so complicated that it is producing a long list of unintended consequences.

The second is that it is so untested, so unpragmatic, that who knows what’s going to happen in the years ahead as implementation kicks in. It is the exact opposite of the empirical revolution driven by private sector employers to get a handle on costs and improve workforce health. Private sector managers test products before rolling them out.

The third is that costs/premiums are going to go up sharply for many, many Americans, including Congressmen and their staffers.

The fourth is that old curmudgeons, like Sensenbrenner and me, get more cantankerous with each passing year.