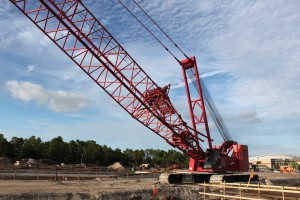 On a recent weekend there, as the Broncos defeated the Steelers, I counted 12 tall cranes, most with a Manitowoc brand, for the construction of offices, two hotels and condos, all within two square miles in the center of the city.

The city development department and the state have done a lot of things right to create the strikingly positive dynamics. Here are some of the smart decisions:

• The state limits on taxes and spending under a Taxpayer Bill of Rights (TABOR) is two decades old and has given business and developers a sense of certainty about the future business climate. That breeds confidence for launching big projects. (A similar TABOR was considered ten years ago in Wisconsin and such limits are already in place for local government.)

• TABOR allows voters to override limits on tax increases. They have, for example, appropriated a sales tax of 1/10th of 1% over a seven-county region around Denver for arts and science facilities. The Scientific and Cultural Facilities District pulls in a hefty $51 million per year. (Such a tax has been prosed for the seven M7 counties in Southeastern Wisconsin.) The Denver district supports about 300 cultural and science organizations and programs. Voters can put such initiatives on the ballot. They are in control.

• Its three sports facilities for the Broncos, Rockies and Nuggets, mostly privately funded, are all in close proximity to downtown.

• A transportation tax, also approved by voters, supports a regional rail system, including light rail that connects downtown, the stadiums, the art center and the combined campus. A free bus runs up and down the 16th street pedestrian mall, with stops every five minutes. The state capitol and city hall anchor one end and Union Station the other end.

• Term limits mean politicians have only eight years to get their agenda accomplished. Some observers believe this makes them less likely to dither. Big development projects move swiftly in Denver.

• Leaders in the private sector, not politicians, drive Denver’s economic development, though pro-growth mayors and governors come from both parties.

• Most of the downtown private building projects go forward without subsidies from government.

• The Denver region targets clusters so there is focus to its development. (M7 has taken the same tack with fresh water, food and beverages, medical devices, advanced manufacturing, energy and controls. A video cluster is emerging. Others like insurance and investment management do not get enough strategic attention.)

It’s hard to discern which factors and resources contributed to most to transforming downtown Denver from a fairly seedy place 25 years ago to a huge success story today.
It took a while for the mix of TABOR, term limits and smart decision making to take hold. The proximity to the mountains is an elixir, but the combination of vision, smart urban planning and leadership has worked. Denver is hot.