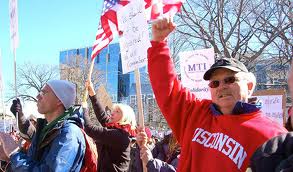 Wisconsin’s Republicans are going to have to call a second special session of the Legislature on job creation.

That was the main agenda item for the first such session called right after Gov. Scott Walker took office in January.  But job creation quickly moved to the back burner in the uproar over the elimination of public union “rights.”

The two GOP-controlled houses passed small  tax breaks, meant to be more symbolic than effective in terms of job creation. And they created a new hybrid public-private agency to replace the Department of Commerce, which had provided  insufficient leadership for re-inventing the state’s sputtering economy.

But the GOP legislators also tackled a host of issues that had little to do with the economy or job creation.  In fairness, there’s only so much politicians can do to get the business world moving so hiring starts again.

Nonetheless, Republicans lost focus on the two-part message that got them into the majority position in Madison:

Arguably, balancing the state budget, partly through union concessions, could have a positive effect on the state’s business climate.  However, the effect is indirect.

Will my company hire more workers because the state’s budget is balanced?  Of course not.  The balanced budget may result in fewer future tax increases or even lower taxes, but that is of little help in the present tense.

The same goes for the many small tax breaks just enacted.  My company will get a deduction of $2000 for every worker we hire.  The company is in the 7.9% tax bracket, so we will save $158 for every new job.  Is that enough to justify creating a job that will probably cost $30,000 or more?

Clearly, we will only be adding workers as business volume picks up.  And we will not be tipped one way or the other by the $158 incentive.

The big fight in Madison has been over the bargaining powers and dues collection by public unions.  But, once again, what happens to the public unions has little effect on private companies, which are mostly non-union, and therefore on job creation.

More important is what didn’t happen the first three months of the Walker Administration.

Prior to Gov. Walker taking office, more than 30 of the state’s largest stakeholders got together and adopted an economic strategy called “Be Bold – The Wisconsin Prosperity Strategy.”  It represents the best thinking of those with the most to win or lose in the Wisconsin economy.

Here are some elements of the Prosperity Strategy that have been lost in the polarized uproar over unions:

This is a partial list of the economic initiatives that have been lost in the sound and fury since January.

It would be inaccurate to say the Walker Administration has not been strategic.  It has been hugely strategic in a political sense.  It has gone after the flow of political donations from public unions to the Democratic Party.  That political move was like Sherman into Georgia.

The Democrats responded with political brilliance.  They adopted every political tactic in the books, including de-camping to Illinois. That allowed time for a massive set of demonstrations. Union leaders nationally are fully engaged here in their job protection.

It’s hard to know who’s winning the hearts and minds of the overall population on the union question legislation.  The outcome of future legislative elections will tell the tale.

Did the Walker Republicans overreach?  Gov. Walker is rolling the dice that the GOP won’t lose the state Senate in the summer’s recall elections. That’s not a given.

The next benchmark will be the legislative elections in 2012. By then, job creation and the economy could become the big issue again. So a second special session – without distractions – might be well advised.

The first three months of   Gov. Walker’s first term have enjoyed job creation sufficient to get to 250,000 new jobs in his first term, but that’s due to a  long awaited pick–up in the economy. Stronger measures will be needed to sustain the pace.