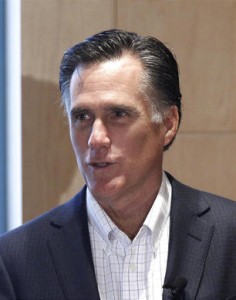 Mitt Romney thinks the income tax on U.S. corporations ought to be dropped from 35% to 25%, but is worried that effects of the revenue loss on the country’s staggering deficits.

Yet, there is a politically smart way forward.

He is certainly aware that the a good number of the nation’s largest corporations deploy armies of lawyers, accountants and lobbyists and use their offshore locations to sharply cut their income tax payments to the U.S. Treasury. Some of the multinational corporations pay zero.

The case for lower rates is a comparative one. Ireland changed the game when it moved to an all-in rate of 12%, which is hugely competitive with other countries in terms of attracting foreign corporations and investors, even with countries in Eastern Europe that have dropped their rates below 20%.

It worked. The low rates, along with other business friendly policies, jump-started the long dormant Irish economy. The gain was lost through a real estate bubble and deficit spending, but the tax reduction was a win.

Ireland only has a federal tax, while most states in the U.S. also slap on a corporate income tax. Wisconsin’s has been 7.9%, making for a combined rate of more than 40%.

Now Wisconsin has stolen a page from the Irish playbook by offering manufacturers tax credits that phase in through 2016. They will offset 7.5 points of the 7.9% tax.

The best way to replace the lost tax revenue is through growth in the economy and the job base.  Newly employed workers could make up for the loss of corporate taxes, which usually make up only a small slice of total taxes any way.

The second way is an alternative minimum tax on corporate income at the federal level. It is not fair for behemoth corporations to escape the tax liability that most corporations endure for the privilege of doing business in America. Nor is it good business for the Treasury.

Romney could sound that populist note and differentiate himself from the other GOP contenders. He is a first class fund-raiser, who doesn’t need every last dollar from the top 1000 companies.

On the vote-getting side, such a stance would appeal to the independents who control 40% of ballots cast. They vote in primaries, too.