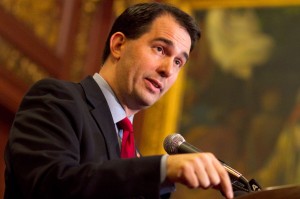 As Wisconsin Gov. Scott Walker sets himself up to win a second term in 2014 and to position himself as a presidential contender in 2016, he needs to make good on his number one objective from his 2010 campaign: job creation.

He has proved he can balance a state budget drowning in red ink, using tough measures like Act 10 to get the job done. It was a reprise of his fiscal toughness when he was Milwaukee County executive when he orchestrated a string of no-tax-increase budgets. He is rock solid on fiscal management.

The state might even build a decent rainy day fund in his next budget as a reserve for the next economic downturn, something that no recent governor has accomplished.

His team and the GOP leadership in the Legislature have also impressed the guys in the cheap seats who do rankings of business climates in the 50 states. Wisconsin has moved from the perennial bottom of the rankings to the top 20 in several of those beauty contests. The improved perception results from high marks for balancing the budget, for pushing back on bloated benefits negotiated by public employee unions, for tort and regulatory reform, for tax credits for manufacturing companies and investments in startup ventures.

The state, however, has consistently ranked near the bottom for business startups.

It is puzzling that the state’s job numbers have lagged the nation and neighboring states. The most positive read on job growth came out at the end of the second quarter from the U.S. Bureau of Labor and the state Department of Workforce Development. Thanks in part to a statewide uptick in manufacturing jobs, Wisconsin added 35,379 private sector jobs from June 2011 to June 2012.
That’s about half the pace that Gov. Walker promised in his 2010 campaign, namely 250,000 new jobs over his first four-year term. (It would be beneficial to have the third quarter numbers that were turned in by state companies a month ago.) Clearly, the targets have to be re-set for the second half of Walker’s first term.

The laggard performance stems largely from under-performance in our two largest metro areas. The Madison metro area failed to add private sector jobs over the last year, but added 2.8% to government roles, netting a minus .1% for the period. Milwaukee ranked at the bottom nationally for metro job growth at a minus .7%.

Manufacturing and business services grew in the Milwaukee metro area, while only IT grew in the Madison area. Both areas lost ground in financial services, utilities, trade and transportation. Milwaukee dropped in IT.

For comparison, through October other Midwestern cities grew faster: Chicago, up .7%; Minneapolis 1.1%; Des Moines 1.5%; Lincoln, Nebraska .4%, and Indianapolis 2.9%. We’re going to the Rose Bowl in football, but not job creation.

So, what to do about the feckless job growth? Obviously, some tactics are not working. The state’s long-standing and continuing emphasis on recruiting from other states and countries is not paying off. We’ve pick up a few companies from Illinois and Minnesota, but it’s a zero sum game for the most part.

Real estate development helps with construction jobs in the short term, but depends on tenants from other job creators in expanding clusters.

Stimulus spending has debatable effects on the economy.

Two recent studies confirm the findings of several years ago that startup companies are the fallow ground for new jobs. The Goldwater Institute did a recent, deep dig on the connection between entrepreneurship and poverty rates. It published a report in November that concluded: “For every 1 percentage point increase in the share of entrepreneurs in a state, the poverty rate declined by more than 2 percentage points.” Crime levels also drop with more active businesses in a neighborhood.

So, let’s get to the strategic level as Gov. Walker and our legislative leaders fashion a jobs policy for 2013 and beyond.

First, it’s not just about manufacturing. Except in Madison, that sector is ticking up. Great! But it is never going to be the job generator that it was before out-sourcing, lean disciplines and intense automation changed how manufacturing operates. We need to also concentrate on the other state clusters, such as finance, insurance, and information technology. We were in negative territory in those clusters in 2012. Other states are doing better.

Health care, business services and education are winners, too. Emerging sectors like fresh water technology, bio-technology and energy storage hold promise
Second, encourage entrepreneurship in every square inch of Wisconsin, whether it’s great entrepreneurs in the finance sector like Milwaukee’s Kellner, Strong, Nasgovitz, Nicholas, Ziegler and Byrnes or the many smaller shops that spun out of their successes. Ditto with IT and its innovators like Faulkner of Epic and its 6,000 jobs. Ditto with insurance, a longtime strength of the state that has slipped some in the last decade.

We are just scratching the surface of what this state could do if its entrepreneurs were unleashed.
The Goldwater Institute cites evidence that lower corporate and personal income rates help the level of entrepreneurship. Gov. Walker is astutely looking at lowering both in the next budget. Even small cuts would send a strong message about our business and entrepreneurial climate.

He could also jaw-bone our university foundations and the state’s pension fund to allocate more of their alternative investments to Wisconsin early stage funds. Tommy Thompson did just that when he was governor. The governor could create a fund of funds to match private funds raised for venture investments. Early stage capital formation is gaining headway across the state, but we have a long way to go to catch the leading states.

Local and regional governments and organizations could also intensify their efforts to help innovators get out of the starting gate.

We invest a ton of dollars in this state to develop highly educated people, and we do a lot of R&D. The resulting intellectual property is our greatest resource.

Let’s turn the innovators loose. Does someone have a better idea?