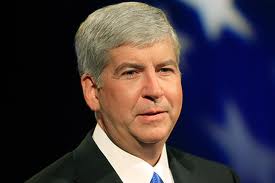 William Ginn warned 150 advocates of the Great Lakes about the multiple threats to their health in a “water hungry world.”
Gathered under the auspices of The Nature Conservancy (TNC) in Dearborn, Michigan, the birthplace of mass production, Ginn, TNC chief conservation officer, reminded the audience that “our fantastic ocean” had already seen great damage and amazing recoveries.
By the middle of the 1900s, parts of the Great Lakes “were dead,” he said. “You could go to the beach, but you couldn’t swim in it.”
He compared “the enormous super abundance of water in the U.S.” to the paucity in China, where leaders are just beginning to deal with their water issues. That country has four times the population as the U.S., but only 15% of its land is moist and rich enough to be arable. America has three times its farmland.
Their leaders are “going through their Teddy Roosevelt moment,” he said, and have raised $30 million for TNC projects in China.
He and other TNC speakers at the Great Lakes Strategy and metrics meeting outlined a broad range of threats during the course of the conference, including:

• The projected growth of the world’s population from seven billion today to nine billion by 2050.
• The rising appetite for better diets and more protein, which will increase the demands on arable land and fresh water. Agriculture consumes 85% of the world’s water.
• The explosion of invasive species in the lakes, such as the trillions of quagga muscles that line the bottom of the lakes and the threat of Asian carp working their way up the Chicago River.
• The drastic reduction of fish counts across many species, especially at deep levels.
• The existence of unncessary dams and many aging and poorly designed culverts that restrict flows and fish movements in waterways.
• Raw sewage dumps. Michigan Gov. Rick Snyder said his state is responsible for an unacceptable sewage dumping – seven million gallons per year. That’s just one state.

Meeting such threats would appear overwhelming if it weren’t for the marked progress that has been made in recent decades. As examples, the Fox River and the upper branches of the Milwaukee
Rivers are fishable again. Milwaukee has dug deep tunnels to cut is sewage dumps drastically.
Thought the state was deforested in the last half of the 1800s, half of Wisconsin is now forested again.
The air quality of southeast Wisconsin has markedly improved, almost enough to escape federal non-attainment status.
Those hard-won victories have established a base of optimism that allows leaders of the Great Lakes states to forge ahead with new strategies for the new challenges.
Snyder, a former TNC trustee, urged the strategists to harness TNC’s scientific muscle to do just that. Nice to hear from a governor who gets the concept that the environment and economy must move forward together.