Massive birds decline can be reversed

Shawn Graff has spent his life in preservation and conservation – first of historic Wisconsin mansions and museums, then of precious lands in the Milwaukee River and Lake Michigan watersheds. His latest cause is to reverse a major decline in woodland and grassland birds across America.

He likes challenges, and as Midwest Director of the American Bird Conservancy, (ABC), he has bitten off a big one. From his home in Slinger, he flies all over the country to develop strategies and resources to save the birds.

His former leadership positions included 13 years as executive director of the Ozaukee Washington Land Trust, which preserved more than 6000 acres in the two counties, often along the banks of the Milwaukee River and its tributaries. Graff has all the necessary experience for a major undertaking.

Recent research based on bird counts showed a massive drop of 29% in the country since 1970 in most bird species, which once numbered an estimated 10 billon. The report was a shocker. It’s downright scary for any conservationist and should be for everyone who lives on this planet. In one sense, as our feathered species go, so we go.

Is there any hope for reversing this negative trend line?

He cites the positive numbers for waterfowl in North America. Thanks in part to conservation organizations like Ducks Unlimited; waterfowl counts have been bumping up against 50 million for the last five years, around an all-time high.

There are other good stories about birds, such as the resurgence of the American eagle following the banning of DDT by the EPA in 1972.

Such as the proliferation of the American turkey across the upper Midwest. Such as the bigger flocks of sandhill cranes that need open prairies, grasslands, and wetlands for breeding and foraging. Such as the expansion of the white pelican into the Great Lakes.

The most common denominators to these amazing recoveries are habitat improvement and elimination of bird killers. Not only eagles, but other raptors are on the rise also following the elimination of DDT.

ABC has strategies on both. Like keep your cats indoors. Like put hanging objects in your clear windows. Like buy glass designed with patterns to prevent strikes.

The biggest ABC campaign is habitat restoration. Graff cites the de-listing this year of the endangered Kirtland’s warbler. “It’s a big victory,” he said. That specie was down to an estimated 172 pairs in 2013. The restoration efforts have the count back to 2000 pairs. 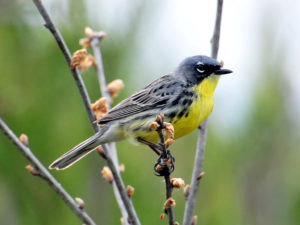 Two major factors helped: a program of trapping and killing cowbirds, which lay their eggs in the Kirtland’s nests and smarter reforestation of Jack pines.

The warblers need young pine stands for breeding and nesting and older stands for mature birds. ABC has worked, for example, with foresters in the Barrens region of northwest Wisconsin to sequence their Jack pine plantings so there is always a blend of tree maturities. (That was the area that suffered a massive burn of over 7500 acres in 2013.)

It might be expected that conservationists would despair over the massive bird declines. But the positive impact of habitat preservation and restoration of wetlands in the Canadian nesting areas for ducks offer hope. The same goes for the broad scale improvements in water quality in our rivers and lakes across the country. The improved habitat has restored duck populations. Geese have multiplied to what some regard as nuisance levels.

Flocks of sandhill cranes now have extended their breeding range into most of Wisconsin, as far south as Washington County north of Milwaukee.

The waterfowl success, excluding shorebirds, along with the Kirtland’s warbler win, energizes ABC and many partners think big.

The ABC collaboration has set a goal of conserving 50 million acres for the benefit of birds and other critters by 2050. That’s acreage the size of Wisconsin.

Too ambitious? Knowing that habitat restoration and protection really worked to bring back waterfowl on this continent, the answer has to be “go for it” on an individual and organizational level.

FYI: My wife and I have not had any bird strikes on our windows since hanging a contraption in what was our deadliest glass window.