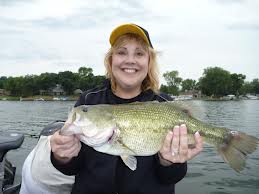 Business people have a hard time believing their ears when Cathy Stepp speaks. Take a look at her regulatory reform message:

“We serve the public; the public doesn’t serve us, “ said the secretary of the Wisconsin Department of Natural Resources. “Time is money man. Businesses today need a quick response” on permits and rulings, she adds.

All these pro-business sentiments are coming from the head of an agency – known pejoratively as “ The DNR” — that has long been regarded as generally hostile to business.

Not so, it has become abundantly clear under Stepp, a former business woman, Republican State Senator and member of the DNR board. She knows the ropes in Madison and is determined to pull off a culture change in the agency so environmental enhancement and job creation can be carried out in a collaborative manner.

Her goal: to make “Our DNR” the number one agency for job creation. She’s blond, bubbly, irreverent and energetic. She just might pull it off. “Patience is not my thing,” she says.

Two policy thrusts show her determination. She created the Office of Business Support and Sustainability (OBSS) that will try to get to answers of “Yes” for citizens and businesses vs. “Nope.”

The second is an emphasis on The State’s Green Tier program under which businesses agree to ambitious environmental targets in return for less micro-regulation. The program moved slowly in previous administrations – only a few have signed Green Tier II contracts. But it’s moving faster under Stepp. Many are taking the first step with a Green Tier I agreement.

The new OBSS has hired nine industrial sector specialists so the agency can be more expert and responsive in its relations to business.

Stepp wants companies to come to the agency early so their plans can be shaped to meet environmental standards. She sees no reason why permits can’t be issued within the 18-month timeline it takes to get a new plant up and running. Issuing a permit should be viewed as a success for state government, she says, not a defeat as in the past.

The Stepp approach is music to the ears of those who work hard on economic development, not an easy task in the struggling economy.

The prevailing attitude in agencies in Wisconsin and many states has historically been more adversarial than collaborative, more attuned to prosecution on the back end of a regulatory process than guidance on the front end. “Businesses are not asking for the rules to be changed; they just want to know what the rules are,” she says.

One of Stepp’s predecessors at DNR, Scott Hassett, who served in the administration of Democrat Jim Doyle, also advocated collaboration over a prosecutorial philosophy on environmental issues. He made a dent, but his ideas didn’t fly very far. When he left the Doyle cabinet early, it was right back to tense relationships between the business world and “The DNR.”

No one foresees Stepp going anywhere. She loves her job and she wants to be a break-the-mold leader. Gov. Scott Walker has to love what she’s doing, and he’s in office for at least two more years.

Wisconsin has already moved from the bottom ten in the country in rankings for business climate to number 20. If Stepp succeeds with her mission of pragmatic collaboration, the state could shoot for number one.