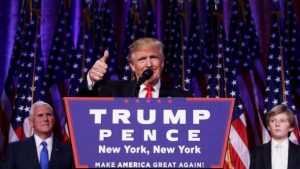 My 105 valid reasons to not vote for Donald Trump obviously had little impact locally or elsewhere, mainly because the dislike of Hillary Clinton and her elitist, crony politics far out-weighed my case. The dissatisfaction with eight years of the Obama Administration also weighed heavily in the GOP sweep across the country.

My home Washington County had the highest percentage of Trump voters in Wisconsin: 68%

There are an infinite number of ways to slice and dice Trump’s narrow win (1% in Wisconsin), but the electorate has spoken: he’s our president for four years starting in two months. The campaign is over; the B. S. has come to a blessed end; the second experiment in a row with a rookie as president begins.

Ironically, I hear these words from people who reluctantly voted for Trump as the least worst — that’s a new Wisconsin sausage: leastwurst — of two lamentable candidates: “Hope” and “Change.” That was Obama’s theme in 2008. Now the Trump voters are hoping he will change his tone and ways as he embarks on his change agenda.

There are right ways and wrong ways to go about change. President Obama forced through Obamacare from the top down, the wrong way, and it has proved unsustainable and politically unpopular.

Let’s all of us, pro – and anti – Trump voters, hope he proves more astute as he launches his agenda.

If you’ve been in management for a whole, you learn to look at people’s feet. You discount the words and watch the feet. You calibrate performance. That’s where Donald Trump and the Republican Party find themselves today.

Trump proved to be a master showman, but that’s all verbosity, insults, verbal attacks, promises, rhetoric. That’s a flood of words that’s water over the dam. They means little any more.

Even though past performance is usually the best indicator of future performance, voters looked at Trump’s previous performance (draft dodger, debt welcher, business bankruptor, lawsuit junkie, policy and party flip-flopper, philanderer, and on and on, and then they looked away. They have taken a big chance that he will be different in the big job.

They hope he will pull in competent people to help him run the enormous federal government. In the swamp he wants to drain, there are some experienced civil servants that he will need to run complex agencies. The agencies don’t run themselves.

In the first hundred days, there will be some easy stuff, such as reversal of executive orders, the appointment of a conservative U. S. Supreme Court justice, reversing some regulations.

Then will come the hard stuff: replacing Obamacare with a better plan to lower health costs and improve quality and access; lowering taxes without ballooning the federal deficit and debt; and reforming immigration without reducing an already tight labor pool and ripping the country apart.

He will have to learn fast how to handle international hot spots without having American men and women coming home in body bags. He will have to figure out how to contain the imperial ambitions of China and Russia and the lunacies of North Korea and Iran.

On trade, he talked tough about cutting back on imports, but he will need to negotiate those tricky waters without shutting down the flow of American exports, upon which many jobs depend. (Wisconsin, for example, exports more than it imports.) if he clamps down too hard on imports, he could trigger a trade war, higher taxes on our exports and a deep recession.

There are pragmatic solutions to most of the challenges he faces and the broad brush promises he made. But there was little sign on the campaign trail that he listens and learns from pragmatists who have been living and dealing in the real worlds outside the unreal world of casinos and politics.

This is a man who knows how to tap into crowd emotions. He’s good on center stage. He communicates with less than half the people in the country and turns off the other half – just as Hillary Clinton did.

To govern, he will have to dig deep into complex issues and he will have to sell solutions to the whole country, not just the disaffected who are actually a minority. He will have to focus long enough to grasp root causes of problems and to engineer workable solutions.

Trump has some major things going for him as he prepares to take office. The biggest advantage is that the country is not as busted as he portrayed it. The economy is chugging along with moderate growth. More people are back at work. Wages have been rising nicely of late.
It wouldn’t take many missteps to cause a recession. He wants to rev up the economy, but job one is to not lose the progress made since the Great Recession.

The second advantage is that we are not in a major ground war. We face on-going danger from the Islamic terrorists, and he needs to take them out without alienating a billion Muslims across the world and within the United States. He needs to make Muslims allies.

Lindsay Graham understands that equation. Make him Defense Secretary. Be big enough to bring in some rivals from the GOP primaries as cabinet members or advisors. Please resist the urge to get even with the GOP establishment, like Speaker Paul Ryan. Make peace in the party, not a civil war. Nothing will get done if the party suffers a major split.

That should be doable for a man who celebrates the art of the deal.

This is a tall set of agenda items for a rookie who is going to have to learn on the job.

It’s not about him anymore. It’s about the Presidency, the institution, and about the well-being of the country.

Much as I detest Trump’s past behaviors, I, like many Americans, hope his future performance will measure up positively for the country.

The ball is in his court. It’s not about showmanship anymore; it’s about performance. That’s also true for the GOP in general.