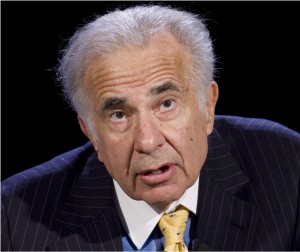 When corporate raider Carl Icahn pontificates about “shareholder value,” let’s be clear he isn’t talking about building long-term value by building useful goods and services. He is talking about making a trading profit in the very short term.

His quick-buck view of shareholder value, a prevailing Wall Street mentality, is evident in his manipulation of the structure of Manitowoc Company. Icahn’s group purchased a 7.7% stake in Manitowoc and then began a push for a split of its two businesses, cranes and food services.

Two other “activist” investment groups have taken similar stakes and are making similar demands. For good reason, those loose groupings of “raiders” are called a wolf pack.

Icahn’s push for a break-up at Manitowoc is his standard gimmick. His formula involves splitting off divisions with little regard to long-term consequences. His first raid, way back in 1985, wrecked Trans World Airlines when he loaded it with debt. He sold it off in pieces.

Manitowoc has conceded to his demands for a split and has given him a board seat and possibly another in each company after the spinoff. Its stock price has moved up a little in recent days.

Expect Icahn and his fellow travelers to move out of the two stocks in relatively short order once they make a trading profit. He has no fundamental interest in what the company does in the real world, like build good products.

Icahn probably couldn’t run a lemonade stand. In the fundamental sense of the word “value,” he is non-value add.

There are good reasons why Manitowoc Company has owned multiple operating divisions. The crane business is a highly cyclical, swinging up and down with the construction sector around the world. The food service business, centered on ice machines, is more stable. The two divisions counter-balance each other.

If, unlike Icahn, you were managing or investing for the long-term health of the company, and for long-term shareholders, that diversity would be a positive. When cranes are in the downside of a capital goods cycle, the food service division would still be producing cash flow.

The crane division will be a much more volatile company when it is standing alone. When Icahn slinks off with his quick-buck profit, the crane company CEO will probably have to make strategic moves to re-diversify it holdings.

Icahn also tried to mess with Oshkosh Corp. In 2014, arguing as usual for a split-up of that cyclical corporation. He failed when management made the case that Icahn’s proposal would add no fundamental value.

There are some corporations that need a shake-up from outside investors, and that can work if the new investors put their money in for the long pull. Other stakeholders like employees, customers, vendors, communities, lenders and governments come out ahead when there is long-term commitment.

It’s hard to figure why Icahn does what he does, He is filthy rich and he’s an old man. Maybe he just likes playing the game.

That’s what it is to him, a game. But it‘s not a game to the many people who put their lives into his target companies.

He and his ilk make the case to any business leader who is thinking about going public: don’t do it — unless you absolutely have to have the capital, or you too want to make a quick buck.