Next UW prez should be seasoned executive 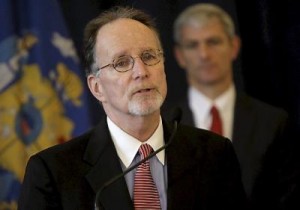 The search for a replacement for Kevin Reilly as UW System president gives the board of regents a chance to take a hard look at where the system finds itself in a rapidly changing world.

As they come to conclusions about where the UW System needs to go in the next decade, it will determine what the profile of the next president should be.

The time-honored answer for the presidency was to pick an academic with a modicum of administrative and leadership chops. Reilly, who has held the job for almost a decade, is an Irish literature scholar who had been head of UW Extension. His predecessor Katharine Lyall, who also served for about a decade, is a labor economist who had been an executive in the UW System.

There is every reason to expect that the next president will serve a decade or so. So what macro trends will the new president face over the next ten years? Here are a few that leap to mind:

• University finances will continue to be stressed as health costs chew up revenue increases coming into state coffers and claim an ever-larger portion of each campus’ budget. The university and other societal priorities will be crowded out until the state’s political leaders muster the gumption to start managing health cost inflation. That could take a while.

• For the same reasons, tuitions will keep rising to cover the out-of-control costs, and that trend will meet with increasing resentment of parents and students.

• Parents and students will look to alternate ways to get an education without loading a young person with a lifetime of debt. Free online education is just one example of such an alternative. The new UW Flexible Degree is one response.

• Pressure is already growing for more sophisticated financial management of the university’s sprawling assets. As an example, off-balance sheet foundations in Madison already hold more than $6 billion in assets. The next UW leader will have to start managing the system’s balance sheet on a consolidated basis. The recent flap over the appropriate level of reserves is another example of that financial management challenge.

• Revenue from sources other than state taxes and tuition will be needed to keep the state’s 26 UW campuses viable. The best-endowed universities in the country are those with the most successful entrepreneurs as alumni. In general, the UW System has lagged in promoting startups. Recent efforts are promising, but UW is still way behind universities that understand technology transfer means startups, not just patents and licenses.

• Global issues from economic to war and peace will have to be in the curriculum for a world-class university as it trains our next generation of leaders.

These challenges call for a new university’s business model. Other industries, such as health care, publishing, airlines, information technology and retail, face similar disruptions in their business models.

It will take a nimble strategic leader to assess the trends, devise a strategy and then to execute the transition to a new model. That would point to a president who has trained to be an executive, but also with a deft political hand. Someone like Mitch Daniels, a former business executive, White House budget czar, governor of Indiana and now head of Purdue University, comes to mind.

Most business executives would not fit the bill, but some would. So would some non-profit executives and some political leaders. In his prime, Tommy Thompson had that kind of profile. Steve Bablitch, a seasoned executive in the private, public and non-profit spheres, could do the job. UW Milwaukee Chancellor Mike Lovell has demonstrated an ability to engage the business world as partners in making education more engaged and entrepreneurial. GE produces politically adept executives with a worldview.

One profile that will not work is that of a caretaker, a steward of the status quo. The gale winds blowing at the university demand a leader for the decade who can see the opportunities more than the challenges, who can shape the resources of the state’s best asset to a refreshed vision.