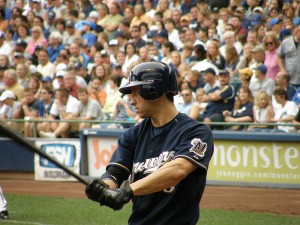 Almost everything that can be said about Ryan Braun’s brazen cheating and massive mendacity has been said, except for one dimension: his 2011 (or earlier) decision to break the rules could be viewed as an entirely rational one.
Ethics aside, and in economic terms only, he made a calculated economic call.

The money in the game is so outlandish that an economic creature, an amoral decision maker, would conclude that the risk of getting caught was worth $100 million in the bank.

Braun’s contracts have been reported at around $130 million all in. He stands to lose about $3 million in pay while suspended for the rest of the 2013 season, and he will lose several millions in endorsements.
He is disgraced, but he’s not in jail like Bernie Madoff, and he’s got nine figures in the bank. He played the odds; he got caught; but he is set for life, and then some.

In purely monetary terms, he made a thoroughly rational decision.

For most people, reputation is more important than money. But there is a percentage of people who would do just about anything for the dough. Especially for big dough.

Braun never was a warm, fuzzy guy. So the relationships based on ethical behavior that make most of us happy may not apply to him. He’s a different bird.

My guess is that if had to make the same decision again, he would dope up again, take the money and take the consequences of Bud Selig’s wrath.

Given the same kind of opportunity, he would have a plenty of company. His soon-to-be-outed fellow players did the same amoral calculus.